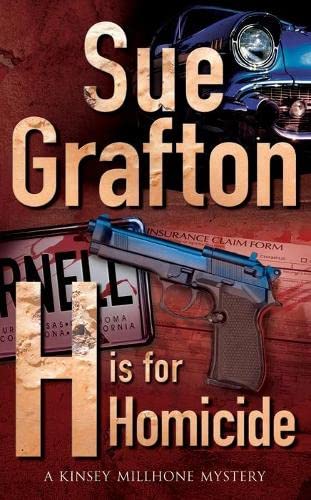 H is for Homicide by Sue Grafton

H is for Homicide by Sue Grafton

It was one of those occasions when I suddenly realised how happy I was. I was female, single, with money in my pocket . . . I had nobody to answer to and no ties to speak of. As usual I'd forgotten how surges of goodwill merely presage bad news.

After a three-week-long investigation, Kinsey couldn't wait to get home.

What she needed most was a few quiet days by herself - but two things happened to change all her plans. First she ran into a murder case. Then Kinsey met Bibianna Diaz, and before the night was over they were sharing a prison cell . . .

`Terrifying, hilarious and rather touching . . . S is for Super Sleuth in a scorching story' Daily Mail

`Sue Grafton, creator of Kinsey Millhone, is the most exciting crime novelist around' City Limits

Sue Grafton has become one of the most popular mystery writers, both here and in the US. Born in Kentucky in 1940, the daughter of the mystery writer C. W. Grafton, she began her career as a TV scriptwriter before Kinsey Millhone and the `alphabet' series took off. She lives and writes in Montecito, California, and Louisville, Kentucky.
GOR000459058
9780330321952
0330321951
H is for Homicide by Sue Grafton
Sue Grafton
Used - Very Good
Paperback
Pan Macmillan
1992-09-11
384
N/A
Book picture is for illustrative purposes only, actual binding, cover or edition may vary.
This is a used book - there is no escaping the fact it has been read by someone else and it will show signs of wear and previous use. Overall we expect it to be in very good condition, but if you are not entirely satisfied please get in touch with us
Trustpilot