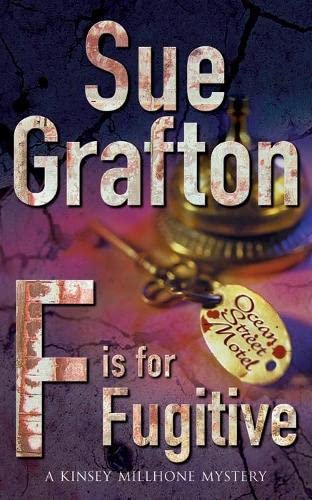 F is for Fugitive by Sue Grafton

F is for Fugitive by Sue Grafton

My name is Kinsey Millhone. I'm thirty-two years old, twice married, no kids, currently unattached and likely to remain so given my disposition, which is cautious at best . . .

Seventeen years had passed since Jean Timberlake's body had been found at the foot of the sea wall.

At the time, Bailey Fowler, an ex-boyfriend of hers, pleaded guilty to voluntary manslaughter. Now he'd changed his tune.

Kinsey Millhone was called in to solve the case - then she stumbled on the dark secrets of a family's buried past . . .

`Kinsey Millhone is up there with the giants of the private eye genre . . . exhilarating stuff' Times Literary Supplement

Sue Grafton has become one of the most popular mystery writers, both here and in the US. Born in Kentucky in 1940, the daughter of the mystery writer C. W. Grafton, she began her career as a TV scriptwriter before Kinsey Millhone and the `alphabet' series took off. She lives and writes in Montecito, California, and Louisville, Kentucky.
GOR000556360
9780330315876
0330315870
F is for Fugitive by Sue Grafton
Sue Grafton
Used - Very Good
Paperback
Pan Macmillan
1991-05-24
352
N/A
Book picture is for illustrative purposes only, actual binding, cover or edition may vary.
This is a used book - there is no escaping the fact it has been read by someone else and it will show signs of wear and previous use. Overall we expect it to be in very good condition, but if you are not entirely satisfied please get in touch with us
Trustpilot