C is for Corpse Sue Grafton 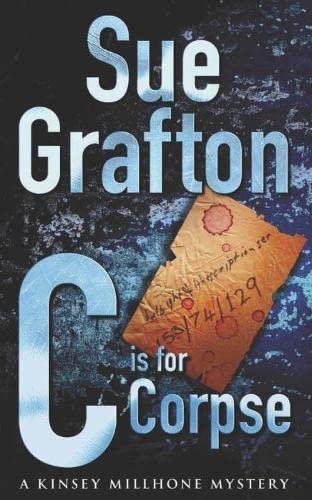 C is for Corpse by Sue Grafton

The third book in the critically-acclaimed Kinsey Millhone series

C is for Corpse by Sue Grafton

`My name is Kinsey Millhone. I'm a licensed private investigator . . . thirty-two, twice divorced. I like being alone and I suspect that my independence suits me better than it should . . .'

Kinsey met Bobby Callahan in the gym on Monday morning.

His story was hard to credit: a murderous assault by a tailgating car on a lonely rural road, a roadside smash into a canyon 400 feet below, his Porsche a ruin, his best friend dead, and his memory severely impaired. He was convinced someone was trying to kill him.

By Thursday, he was dead.

But Kinsey wasn't going back on a deal. She had been hired to prevent a murder. Now she was looking for the murderer . . .

`C is for classy, multiplex plotting, strong characterization and a tough cookie heroine' Time Out

`She has guts, humour, and conscience. . . alphabetically speaking, we can look forward to 23 more Kinseys' The Times

"'Quiveringly alive' Daily Telegraph; 'C is for classy, multiplex plotting, strong characterization and a tough cookie heroine' Time Out; 'She has guts, humour, and conscience... alphabetically speaking, we can look forward to 23 more Kinseys' The Times"
Born in 1940, Sue Grafton is the daughter of mystery writer C. W. Grafton, and began her career as a TV script writer. She lives and writes in Montecito, California, and Louisville, Kentucky.
GOR000814497
9780330315845
0330315846
C is for Corpse by Sue Grafton
Sue Grafton
Kinsey Millhone Alphabet series
Used - Very Good
Paperback
Pan Macmillan
1990-09-14
352
N/A
Book picture is for illustrative purposes only, actual binding, cover or edition may vary.
This is a used book - there is no escaping the fact it has been read by someone else and it will show signs of wear and previous use. Overall we expect it to be in very good condition, but if you are not entirely satisfied please get in touch with us
Trustpilot