B is for Burglar Sue Grafton 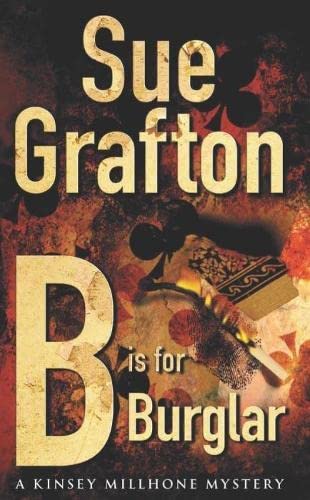 B is for Burglar by Sue Grafton

The second book in the critically acclaimed Kinsey Millhone series

B is for Burglar by Sue Grafton

`Female, age thirty-two, self-employed and wiser than she used to be. For Kinsey Millhone, private investigator, only one thing stays the same. When a client sits down in the chair across the desk, she never knows what's going to happen next . . .'

There was nothing about Beverly Danziger to cause Kinsey concern. She was looking for her sister. There was a will to be settled. She paid up front. And if it seemed a lot of money for a routine job, Kinsey wasn't going to argue.

She kicked herself later for the things she didn't see - Beverly Danziger did not look as if she needed a few thousand dollars and she didn't seem like someone longing for a family reunion. But just as Kinsey begins to suspect foul play and start asking questions, Beverly Danziger pulls her off the case and fires her . . .

"'One of the best written crime novels by anybody in recent memory' New York Times; 'Kinsey Millhone [is] just about the gutsiest as well as the shrewdest of her kind' Observer; 'An unusually compelling series of novels with a notably convincing central character' Guardian"
Born in 1940, Sue Grafton is the daughter of mystery writer C. W. Grafton, and began her career as a TV script writer. She lives and writes in Montecito, California, and Louisville, Kentucky.
GOR000813332
9780330315838
0330315838
B is for Burglar by Sue Grafton
Sue Grafton
Kinsey Millhone Alphabet series
Used - Very Good
Paperback
Pan Macmillan
1990-08-10
384
N/A
Book picture is for illustrative purposes only, actual binding, cover or edition may vary.
This is a used book - there is no escaping the fact it has been read by someone else and it will show signs of wear and previous use. Overall we expect it to be in very good condition, but if you are not entirely satisfied please get in touch with us
Trustpilot