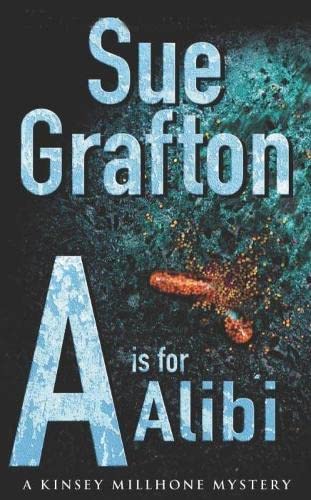 A is for Alibi by Sue Grafton

A is for Alibi by Sue Grafton

`My name is Kinsey Millhone. I'm a private investigator, licensed by the state of California. I'm thirty-two years old, twice divorced, no kids. The day before yesterday I killed someone and the fact weighs heavily on my mind . . .'

When Laurence Fife was murdered, few cared. A slick divorce attorney with a reputation for ruthlessness, Fife was also rumoured to be a slippery ladies' man. Plenty of people in the picturesque Southern California town of Santa Teresa had reason to want him dead. Including, thought the cops, his young and beautiful wife, Nikki. With motive, access and opportunity, Nikki was their number one suspect. The Jury thought so too.

Eight years later and out on parole, Nikki Fife hires Kinsey Millhone to find out who really killed her husband. But the trail has gone cold and there is a chilling twist even Kinsey didn't expect . . .

"'Skilful and ingenious' Irish Times; 'I love Sue Grafton's Kinsey Millhone novels... you are never disappointed' Guardian; 'Will keep you awake until the last page has been turned' Daily Mail"
Born in 1940, Sue Grafton is the daughter of mystery writer C. W. Grafton, and began her career as a TV script writer. She lives and writes in Montecito, California, and Louisville, Kentucky.
GOR000289224
9780330315821
033031582X
A is for Alibi by Sue Grafton
Sue Grafton
Kinsey Millhone Alphabet series
Used - Very Good
Paperback
Pan Macmillan
1990-08-03
368
N/A
Book picture is for illustrative purposes only, actual binding, cover or edition may vary.
This is a used book - there is no escaping the fact it has been read by someone else and it will show signs of wear and previous use. Overall we expect it to be in very good condition, but if you are not entirely satisfied please get in touch with us
Trustpilot