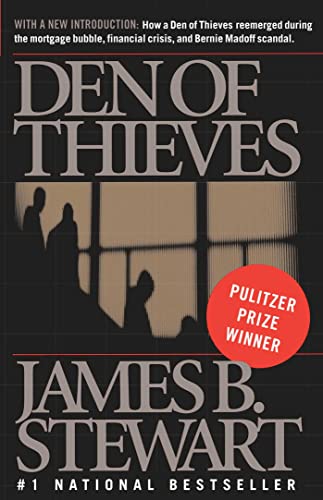 Den of Thieves by Stewart

Den of Thieves by Stewart

A #1 bestseller from coast to coast, Den of Thieves tells the full story of the insider-trading scandal that nearly destroyed Wall Street, the men who pulled it off, and the chase that finally brought them to justice.

Pulitzer Prize-winner James B. Stewart shows for the first time how four of the eighties' biggest names on Wall Street--Michael Milken, Ivan Boesky, Martin Siegel, and Dennis Levine --created the greatest insider-trading ring in financial history and almost walked away with billions, until a team of downtrodden detectives triumphed over some of America's most expensive lawyers to bring this powerful quartet to justice.

Based on secret grand jury transcripts, interviews, and actual trading records, and containing explosive new revelations about Michael Milken and Ivan Boesky written especially for this paperback edition, Den of Thieves weaves all the facts into an unforgettable narrative--a portrait of human nature, big business, and crime of unparalleled proportions.

A fast-paced adventure populated with people who could teach the characters in 'Dallas' and 'Dynasty' a thing or two....It is a must read for anyone trying to make sense of the greed decade.--USA Today "The New York Times"
A revealing, disturbing tale of what can happen when greed runs rampant.--The Seattle Times "The New York Times"
Absolutely Splendid...Tremendously Important...Indecently Readable.--Michael Thomas "The New York Times"
Bursting with details...but told with magical clarity.--The Washington Post "The New York Times"
Stewart takes the reader through the maze of arcane Wall Street dealings as if he were writing a detective story.--The Philadelphia Inquirer "The New York Times"
James B. Stewart is the author of Heart of a Soldier, the bestselling Blind Eye and Blood Sport, and the blockbuster Den of Thieves. A former Page-One editor at The Wall Street Journal, Stewart won a Pulitzer Prize in 1988 for his reporting on the stock market crash and insider trading. He is a regular contributor to SmartMoney and The New Yorker. He lives in New York.
GOR001429102
9780671792275
067179227X
Den of Thieves by Stewart
Stewart
Used - Very Good
Paperback
Simon & Schuster
1992-10-06
587
N/A
Book picture is for illustrative purposes only, actual binding, cover or edition may vary.
This is a used book - there is no escaping the fact it has been read by someone else and it will show signs of wear and previous use. Overall we expect it to be in very good condition, but if you are not entirely satisfied please get in touch with us
Trustpilot