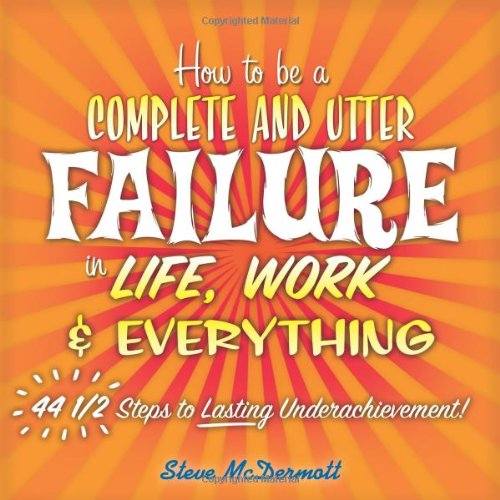 How to Be a Complete and Utter Failure in Life, Work & Everything by Steve McDermott

How to Be a Complete and Utter Failure in Life, Work & Everything: 44 1/2 Steps to Lasting Underachievement by Steve McDermott

Really want to know how to fail? Consistently? Massively? Irrevocably?

Steve McDermott's spent years studying the world's greatest failures: those extraordinary individuals who've spectacularly underachieved in every walk of life. They all use the exact same skills and strategies--and you can learn them, too. (Maybe you know some already!) In this quick, incredibly practical guide to failure, McDermott brings together dozens of state-of-the-art techniques guaranteed to help you crash, burn, and disappoint everyone in your life. In just minutes, discover how to fail at...

* Financial security * First impressions * And so much more!

DANGER: Do NOT attempt to reverse these techniques. If performed in the opposite fashion, they may cause spectacular success. The publisher and author will not be held responsible for wealth, happiness, or career achievements resulting from the use of these skills and strategies in reverse.

Steve McDermott is one of the UK's top motivational speakers, personal coaches, trainers, and consultants. The world's #1 expert on failure, he's been featured on everything from CNN to BBC Radio.

How to get the most from this guide

And if you do decide why you want it, commit to believing you can't have it.

Step Four Don't know what you value in life (and if you do, lose sight of it)

Step Five Don't spend any of your time in the future

Step Six Don't have any goals

Step Seven If you do have goals, don't put them in writing, and if you do, don't think too big

Step Ten Don't have a mentor or be a mentor

Step Thirteen Don't get feedback on your actions

Step Fifteen Don't get even more feedback, don't be flexible...(you get the idea)

Step Twenty-eight Don't talk and think about what you want

Step Thirty-seven Don't stop always taking `no' for an answer

Step Forty Don't be a leader

Step Forty-four-and-a-half Don't stop doing everything by halves, that's if you do anything at all.

GOR004973972
9780138138103
0138138109
How to Be a Complete and Utter Failure in Life, Work & Everything: 44 1/2 Steps to Lasting Underachievement by Steve McDermott
Steve McDermott
Used - Very Good
Paperback
Pearson Education (US)
2008-01-10
208
N/A
Book picture is for illustrative purposes only, actual binding, cover or edition may vary.
This is a used book - there is no escaping the fact it has been read by someone else and it will show signs of wear and previous use. Overall we expect it to be in very good condition, but if you are not entirely satisfied please get in touch with us
Trustpilot