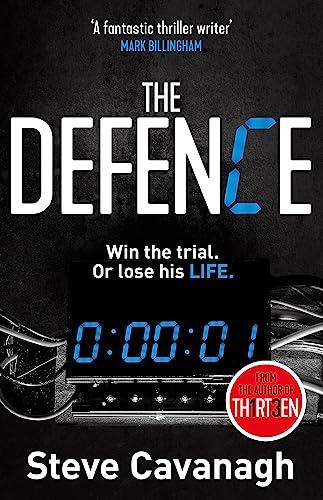 The Defence by Steve Cavanagh

Eddie Flynn has 48 hours to save his daughter...
Nail-biting tension and exhilarating action in this brilliant legal thriller that fans of John Grisham and Lee Child will love.

The Defence: Win the trial. Or lose his life. by Steve Cavanagh

'Everything a great thriller should be and I can't wait to see more of Eddie Flynn.' Mark Billingham

'So Hollywood, punchy and cool and pacy as hell.' Eva Dolan

Eddie Flynn has 48 hours to save his daughter...

Eddie Flynn used to be a con artist. Then he became a lawyer. Turned out the two weren't that different.

It's been over a year since Eddie vowed never to set foot in a courtroom again. But now he doesn't have a choice. Olek Volchek, the infamous head of the Russian mafia in New York, has strapped a bomb to Eddie's back and kidnapped his ten-year-old daughter, Amy. Eddie only has forty-eight hours to defend Volchek in an impossible murder trial - and win - if he wants to save his daughter.

Under the scrutiny of the media and the FBI, Eddie must use his razor-sharp wit and every con-artist trick in the book to defend his 'client' and ensure Amy's safety. With the timer on his back ticking away, can Eddie convince the jury of the impossible?

'A gripping, twisty thriller' Ian Rankin, number 1 bestselling author of Rather Be The Devil

'Legal thrillers are my blind spot, but I'll always make an exception for Steve Cavanagh. Quite simply, THE PLEA is one of the most purely entertaining books you'll read this year. It's a blast.' John Connolly, bestselling author of the Charlie Parker series

'In the crowded field of legal thrillers, Steve Cavanagh stands head and shoulders above the competition, with his skilfully plotted, action-packed and big-hearted Eddie Flynn novels . . . highly intelligent, twist-laden and absolutely unputdownable' Eva Dolan, author of the critically acclaimed Tell No Tales

'Raymond Chandler could have created Eddie Flynn. THE PLEA is Phillip Marlowe and Michael Connolly's Mickey Haller combined, with a bit of Jim Thompson's THE GRIFTERS thrown in. A superb read with a main character destined to be one of the most talked about in crime fiction.' Howard Linskey, author of The Search

If you like John Grisham, Lee Child and Michael Connelly, you will LOVE the gripping and twisty Eddie Flynn series:

THE DEFENCE is everything a great thriller should be and I can't wait to see more of Eddie Flynn -- Mark Billingham
Part classic courtroom drama in the John Grisham tradition and part Bruce Willis-like action hero fiction straight out of the Die Hard franchise, this is a rip-roaring action-packed and highly entertaining debut * IRISH INDEPENDENT *
[It] reads a lot like a courtroom drama that Lee Child might write about Jack Reacher's younger, hotter-headed brother . . . This is afoot-to-the-floor thriller that pulls out with tyres smoking and takes no prisoners until it judders to a halt 400 pages later * IRISH TIMES *
'Puts the "thrill" back in "legal thriller". Non-stop action, unexpected and totally cool plot twists, a sympathetic genius of a con-man/attorney, and a clock that never ever ever stops ticking -- this isn't narrative drive, it's rocket-like narrative propulsion! Hop aboard and enjoy the ride!' -- John Lescroart, NEW YORK TIMES bestselling author
'Imagine THE VERDICT's Frank Galvin crossed with THE FIRM's Mitch McDeere and you'd get something like Eddie Flynn, the quick thinking, troubled, kinetic lead of Steve Cavanagh's debut thriller . . . A deliriously fast and enjoyable ride from the next big Irish crime fiction star. Highly recommended' -- Adrian McKinty, author of the Sean Duffy series
Get ready for a legal thriller that'll grab you by the throat . . . Eddie Flynn makes his explosive debut -- Gerard Brennan
Cavanagh's stellar debut provides everything a reader could ask for in a thriller - nail-biting suspense, a Russian nesting doll of a plot, and an original and compelling lead * PUBLISHERS WEEKLY *
A full-on thrill-ride that hits the gas on page one and doesn't let up until the end. Steve blends a taut legal thriller with a ticking-clock suspense plot and throws in a great protagonist in the form of Eddie Flynn that readers will want to see again and again. A terrific debut -- Stuart Neville
Like Mickey Haller and Mitch McDeere before him, readers will love lawyer Eddie Flynn, the star of this high-octane, hugely entertaining legal thriller. On the evidence of this blistering debut, we'll be hearing much more of Steve Cavanagh -- Brian McGilloway, author of LITTLE GIRL LOST and HURT
Steve Cavanagh manages to pull off not only a terrific courtroom drama, but also a bit of an edge of the seat thriller, some witty and darkly humorous moments and a character you will fall in love with * LIZ LOVES BOOKS *
Thriller readers, Michael Connelly readers, book readers, pick up THE DEFENCE, I almost guarantee you won't regret it. An addictive read from start to finish and one that I have no hesitation in recommending * BOOK ADDICT SHAUN *
It's a book you're not going to want to miss. I finished this last night and ended up dreaming of kidnapped children. That's how good this book is * REBECCA BRADLEY CRIME *
It's sharp, clever and a brilliantly executed thriller. And it's not often I write those words. THE DEFENCE is a great debut, and here's hoping there's more of Eddie Flynn to come * RAVEN CRIME READS *
I was entertained from the turn of the first page until its frenetic ending. It was never a case of will he or won't he succeed it was how. It's the strength of this how that makes the book so engaging and clever . . . a fast paced courtroom thriller that is so much more than a prosecutor, a defence lawyer and a ruthless defendant. This is one book I'd love to see made into a film * MILORAMBLES *
'If anything the reviews were giving faint praise - this is a really really impressive debut novel.' -- MF Bailey
A fantastic summer-read, hours lost as the pages turned freely. Steve Cavanagh and Eddie Flynn are names to keep an eye out for. I'll be around for the next one. Guaranteed. * Written by Sime *
'From the first paragraph to the last, this is a legal thriller you will not want to put down.' * WOMAN'S WAY *
Steve Cavanagh was born and raised in Belfast before leaving for Dublin at the age of eighteen to study Law. He practiced civil rights law and was involved in several high-profile cases; in 2010 he represented a factory worker who suffered racial abuse in the workplace and won the largest award of damages for race discrimination in Northern Ireland legal history. He holds a certificate in Advanced Advocacy and lectures on various legal subjects (but really he just likes to tell jokes). His novel The Liar won the CWA Gold Dagger award while his follow-up novel Thirteen won the Theakston Old Peculier Crime Novel of the Year Award in 2019. Twisted was a Sunday Times Top 10 Bestseller. He is married with two young children. Follow Steve on Facebook at facebook.com/SSCav1 and Twitter @SSCav
GOR007310694
9781409152316
1409152316
The Defence: Win the trial. Or lose his life. by Steve Cavanagh
Steve Cavanagh
Eddie Flynn
Used - Very Good
Paperback
Orion Publishing Co
2016-02-11
320
N/A
Book picture is for illustrative purposes only, actual binding, cover or edition may vary.
This is a used book - there is no escaping the fact it has been read by someone else and it will show signs of wear and previous use. Overall we expect it to be in very good condition, but if you are not entirely satisfied please get in touch with us
Trustpilot