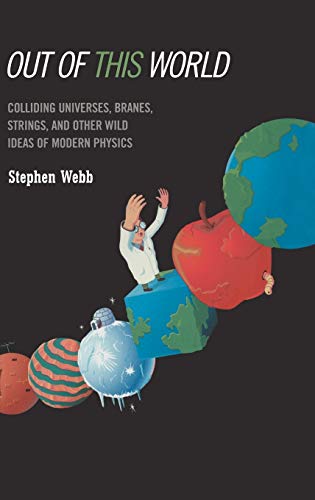 Out of this World by Stephen Webb

Stephen Webb, author of WHERE IS EVERYBODY?, takes the interested amateur on a thrilling and enlightening tour of the amazing, even bizarre, new ideas of modern physics, including alternatives to the Big Bang, parallel universes, and an imaginary trip to the other side of the black hole.

Out of this World: Colliding Universes, Branes, Strings, and Other Wild Ideas of Modern Physics by Stephen Webb

Stephen Webb, author of WHERE IS EVERYBODY?, takes the interested amateur on a thrilling and enlightening tour of the amazing, even bizarre, new ideas of modern physics, including alternatives to the Big Bang, parallel universes, and an imaginary trip to the other side of the black hole.

"This book is an attempt to share some of the fascinating and exciting idea of modern theoretical physics with a non-mathematical audience. As such, it contains no equations, with the ideas involved in the equations carefully described and illustrated by numerous illustrations. ... The author has produced a delightful and remarkable book, which is warmly recommended to anyone who is curious about modern theoretical physics." (Joseph D. Zund, zbMATH, Vol. 1267, 2013)

"This book explores colliding universes, branes, strings and other wild ideas of modern physics. It is aimed at the non-mathematical reader. ... The style ... is lively and engaging. ... Webb, employed by the Open University in the U.K. has a bright and breezy style, which enlivens the most tortuous of subject matter. Highly recommended as a layman's non-mathematical introduction to some of the weirdest physics around, the book is complete with a necessary glossary and bibliography, with recommended further reading." (Roger Feasey, Journal of the Auckland Astronomical Society, June, 2005)

"Stephen Webb's ... 'Out of this World', is a challenge to those of us who might suspect branes to be a typo and have only a utilitarian view of strings ... . Webb skillfully conveys the meaning of many advanced concepts of theoretical physics, such as renormalisation and gauge symmetries. ... the book has a useful glossary and index. Webb is good on the history of modern thought on the mysteries of nature, introducing the original thinkers. ... a nice book for us non-theoreticians." (Colin Keay, The Physicist, Vol. 41 (6), November/December, 2004)

"For more than 20 years, the physical theory of the fundamental nature of matter and force has stood almost motionless. It describes everything and explains nothing, and now a group of researchers is playing with radical revisions ... in order to get ideas moving again. ... Webb writes clearly and exactly, and is obviously in close touch with recent developments." (D. Park, CHOICE, Vol. 42(3), November, 2004)

"After introducing general relativity and quantum mechanics - the twin foundations of twentieth century physics - he explains how they are fundamentally incompatible. ... Webb makes these strange and wonderful goings-on accessible, engaging, and enjoyable, conveying not just what theories have begun to believe about the cosmos, but the awe and excitement felt by scientists as this new picture of the Universe slowly emerges." (www.firstscience.com, October, 2004)

"Webb's latest book is a look at strings and other things that might underlie the structure of the Universe. Unlike other books ... this one manages to take on the subject in a truly accessible way ... . it is perhaps the best introduction available at this level of the subject." (Richard Wentk, Focus, September, 2004)

"After introducing general relativity and quantum mechanics ... . Then, in a series of increasingly astonishing chapters, he introduces us to the seemingly outlandish and bizarre proposals - from almost unbelievably small particles to huge membranes that may envelope our Universe ... ultimately leading to us to wholly new realms of understanding. Webb makes these strange and wonderful goings-on accessible, engaging and enjoyable ... ."

'Webb helps readers understand what's involved by defining the concepts of symmetry and space-time ... . Webb presents these ideas so that even nonspecialists can grasp the basics of topics as esoteric as alternative dimensions and particle physics.'

Stephen Webb works in Learning and Teaching Solutions at the Open University, England, and is the author of WHERE IS EVERYBODY? (Copernicus Books, 2002.)
1: Symmetry.- 2: Twin Pillars of Physics.- 3: Building Blocks of the Universe.- 4: The Standard Model.- 5: Guts and Susy.- 6: Higher Dimensions.- 7: Superstrings.- 8: The Story of M.- 9: Of Branes and Black Holes.- 10: Our World as a Hologram.- 11: When Worlds Collide.
GOR004343041
9780387029306
0387029303
Out of this World: Colliding Universes, Branes, Strings, and Other Wild Ideas of Modern Physics by Stephen Webb
Stephen Webb
Used - Very Good
Hardback
Springer-Verlag New York Inc.
2004-05-25
308
N/A
Book picture is for illustrative purposes only, actual binding, cover or edition may vary.
This is a used book - there is no escaping the fact it has been read by someone else and it will show signs of wear and previous use. Overall we expect it to be in very good condition, but if you are not entirely satisfied please get in touch with us
Trustpilot