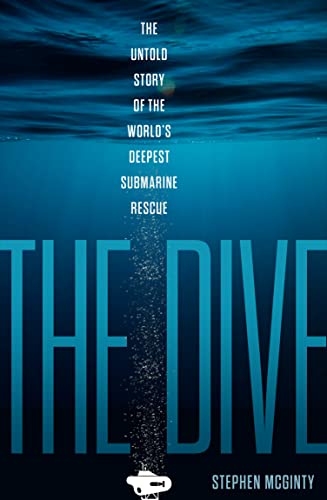 The Dive by Stephen McGinty

The Dive is a thrilling narrative nonfiction in the tradition of The Perfect Storm and Apollo 13.

The Dive: The untold story of the world's deepest submarine rescue by Stephen McGinty

The Dive is a thrilling narrative nonfiction in the tradition of The Perfect Storm and Apollo 13.

They were out of their depth, out of breath, and out of time. It was 1973. Two men were trapped in a crippled submarine 1,700 feet below sea. They only had enough air to survive for two days. On the ocean's surface there was a hastily assembled flotilla of rescue ships from both sides of the Atlantic. The world held its breath to await word of a rescue.

In a routine dive to fix the telecommunication cable that snakes along the Atlantic sea bed, their mission had gone badly wrong. There was a catastrophic fault on board the Pisces III, and Roger Chapman and Roger Mallinson's mini-submarine went tumbling to the ocean bed almost half a mile below.

The crippled sub and its crew were trapped far beyond the depth of any previous sub-sea rescue. They had just two days' worth of oxygen. However, on the surface the best estimates for a rescue of these men was a minimum of three days' time.

The Dive is brilliantly researched by veteran journalist Stephen McGinty. Stephen adeptly reconstructs the race against time as Britain, America and Canada pooled their resources into a 'Brotherhood of the Sea' dedicated to stopping the ocean depths claiming two of their own. Based on previously undisclosed records, maritime logbooks, and exclusive interviews with all the key participants, The Dive takes the reader on an emotional and thrilling ride from the depths of defeat to a glimpse of the sun-dappled surface.

'An unbelievable, completely true story that is so taut and brilliantly told I defy anyone not to cherish every breath they take' Denise Mina

Stephen McGinty is an author, journalist and documentary producer. His previous books include This Turbulent Priest, Churchill's Cigar, Fire in the Night: The Piper Alpha Disaster and Camp Z: How MI5 cracked Hitler's Deputy. He is the co-producer of the BAFTA-winning documentaries Fire in the Night, based on his book, and Dunblane: Our Story.

NGR9780008410773
9780008410773
0008410771
The Dive: The untold story of the world's deepest submarine rescue by Stephen McGinty
Stephen McGinty
New
Hardback
HarperCollins Publishers
20210610
368
N/A
Book picture is for illustrative purposes only, actual binding, cover or edition may vary.
This is a new book - be the first to read this copy. With untouched pages and a perfect binding, your brand new copy is ready to be opened for the first time
Trustpilot