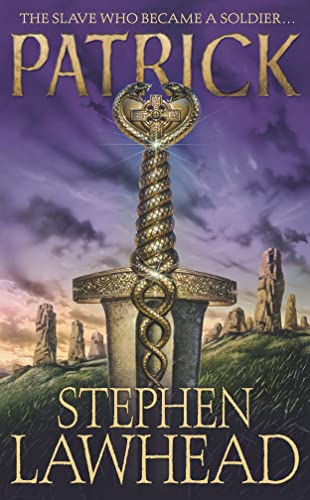 Set in an era of brutal conflict and turmoil, this epic adventure is the first novel to tell the full story of the slave who became a saint, of the man who rose to the challenge of his time and changed the course of history.

Set in an era of brutal conflict and turmoil, this epic adventure is the first novel to tell the full story of the slave who became a saint, of the man who rose to the challenge of his time and changed the course of history.

In the summer of 405AD, Irish raiders attack the western coast of Wales, carving a fiery swathe through the peaceful countryside. Among the survivors who are rounded up and taken back to Ireland is Succat: an impulsive sixteen-year-old son of a powerful Roman family.

Succat is sold as a slave and put to work tending sheep. Repeated escape attempts lead to ever more brutal and savage beatings, until he comes to the attention of Cormac, a young novice druid. The two strike up an unlikely friendship and, as Succat learns the ways of the Irish people, he is given a new name by the druid: Patrick.

With a new name begins Patrick's new life: he is married, and returns to his home to claim his inheritance, only to find his father's estate in ruins. So begins a calamitous journey that will lead him to Tours, see him join the Roman Legion as a soldier, suffer the the horrors of a plague-filled Rome; and thence back to Ireland, where he will embark on a mission for which his name will be remembered throughout history.

In the spirit of Bernard Cornwell's Arthurian cycle, Patrick is a gritty and unsentimental portrait of one of the Western world's great icons, featuring an accurate and compelling rendering of the historical period - an era full of brutal conflict, adventure, turmoil, and visionary inspiration.

`An enjoyable, sweeping and often touching tale of bravery '
SFX

Born and raised in America, Lawhead moved to the UK, to Oxford, in order to research into Celtic legend and history. He now lives in Austria with his wife, writer Alice Slaikeu Lawhead, and their two sons, Ross and Drake.

GOR001390846
9780007148851
0007148852
Patrick by Stephen Lawhead
Stephen Lawhead
Used - Very Good
Paperback
HarperCollins Publishers
2004-03-15
464
N/A
Book picture is for illustrative purposes only, actual binding, cover or edition may vary.
This is a used book - there is no escaping the fact it has been read by someone else and it will show signs of wear and previous use. Overall we expect it to be in very good condition, but if you are not entirely satisfied please get in touch with us
Trustpilot