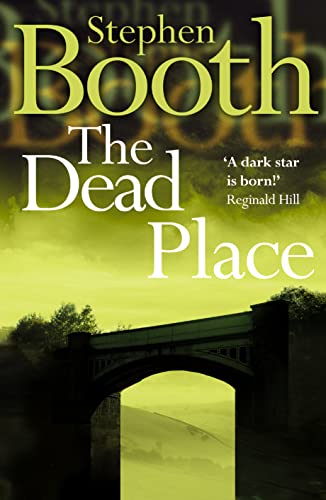 The Dead Place by Stephen Booth

Soon there will be a killing. Close your eyes and breathe in the aroma. I can smell it right now, can't you? So powerful, so sweet. So irresistible. It's the scent of death.

Soon there will be a killing. Close your eyes and breathe in the aroma. I can smell it right now, can't you? So powerful, so sweet. So irresistible. It's the scent of death.

The anonymous caller who taunts the Derbyshire Police with talk of an imminent killing could be just another hoaxer. The macabre descriptions of death and decomposition could be someone's sick fantasy. But after listening to the voice, so eerily calm and controlled as it invites the police to meet the 'flesh eater', Detective Diane Fry is certain she's dealing with a killer ... And it may already be too late to save the next victim.

DC Ben Cooper, meanwhile, is looking into Derbyshire's first case of body snatching. It is an investigation that will take him into the world of those whose lives revolve around the dead and their disposal, from funeral directors to crematorium staff and a professor whose speciality is the study of death.

'Endows the traditional crime story with a literary strength that lifts it above the general ruck... He gives a satisfying read rather than a quick fix' Jane Jakeman, Independent

'Stephen Booth creates a fine sense of place and atmosphere ... the unguessable solution to the crime comes as a real surprise' Susanna Yager, Sunday Telegraph

'The complex relationship between [Cooper and Fry] is excellently drawn, and is combined with an intriguing plot and a real sense of place: Stephen Booth is an author to keep an eye on' T J Binyon, Evening Standard

'In this atmospheric debut, Stephen Booth makes high summer in Derbyshire as dark and terrifying as midwinter' Val McDermid

'Black Dog sinks its teeth into you and doesn't let go ... A dark star may be born!' Reginald Hill

'Best traditional crime novel of the year' Independent, Books of the Year

Stephen Booth is a journalist. This is his sixth novel in his Peak District series featuring Ben Cooper and Diane Fry.

GOR002257753
9780007172061
0007172060
The Dead Place (Cooper and Fry Crime Series, Book 6) by Stephen Booth
Stephen Booth
Cooper and Fry Crime Series
Used - Very Good
Paperback
HarperCollins Publishers
2005-05-23
464
Short-listed for Theakston's Old Peculier Crime Novel of the Year 2007
Book picture is for illustrative purposes only, actual binding, cover or edition may vary.
This is a used book - there is no escaping the fact it has been read by someone else and it will show signs of wear and previous use. Overall we expect it to be in very good condition, but if you are not entirely satisfied please get in touch with us
Trustpilot