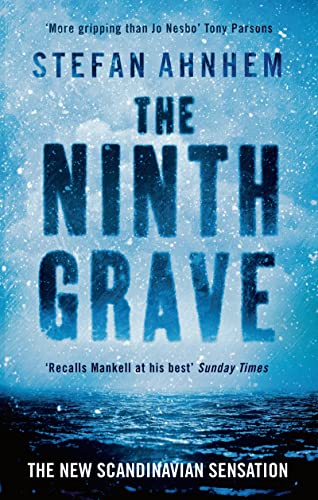 The Ninth Grave by Stefan Ahnhem

The Stockholm and Copenhagen police investigate the death of a Danish TV star and the disappearance of the Swedish Minister for Justice.

The Ninth Grave by Stefan Ahnhem

The stunning prequel to Victim Without a Face.

TWO COUNTRIES IN THE GRIP OF WINTER.
On the coldest day of the year, Sweden's Minister for Justice steps into a blizzard - and disappears. Who has taken him? That same night, across the Baltic Sea, a Danish celebrity is at her home, locked in and cut off from the snow. Then she hears footsteps in her living room. Who is in her house?

TWO KILLERS STALK THE STREETS.
The police are soon hunting two different murderers. One is a surgeon who carefully dissects his victims. The other is a brutal predator who targets random women. Police in Stockholm and Copenhagen are closing in on their suspects. But as winter darkens and more people die, their investigations begin to unravel.

SOMETIMES MURDER IS JUST THE BEGINNING...

'An intense journey, with an intricate plot ... Ahnhem has mastered atmosphere, pacing and intrigue' Crime Review.

'More gripping than Jo Nesbo, blacker than Stieg Larsson and more bleakly human than Henning Mankell' Tony Parsons.
'Atmospheric and complicated ... with great cop characters and some imaginatively grisly perps' Star Pick - The Sunday Times.
'Swedish crime writer of the year. Bliss' 'Books to Look For' - Irish Times.
'Grips like a vice' Irish Independent.
'Ahnhem's story is as bleak as the depths of a Nordic winter, as gory as a charnel house, and as far removed from the concept of Scandinavian hygge comfort as can be imagined, but still grips like a vice' Belfast Telegraph.
'It's time for most Scandinavian crime novelists to step aside and for readers of such to look up. Stefan Ahnhem has arrived and he's terrifically compelling ... A gripping page-turner of the highest order' C.J. Box.
'A tightly plotted, page-turner of a crimefest, with just enough gore to keep things ticking along ... Scandi crime fans are in for a treat with this one' Connaught Telegraph.
'Masterful plot, grisly murders and chilling suspense' Better Reading.
'A very complex novel ... gripping, graphic and gruesome' Woman's Way.
'A very good read that will chill you to the bone' Canberra Weekly.
'Dark, scary and intensely creepy' RTE Guide.
'An intense journey, with an intricate plot and overall a satisfying conclusion ... Ahnhem is a debut author who has already mastered atmosphere, pacing and intrigue' Crime Review.

Stefan Ahnhem is the internationally bestselling author of the Fabian Risk thrillers. He has worked as a screenwriter on Mankell's Kurt Wallander series and serves on the board of the Swedish Writers Guild. He lives in Copenhagen. Follow him @StefanAhnhem.

GOR008396404
9781784975531
1784975532
The Ninth Grave by Stefan Ahnhem
Stefan Ahnhem
A Fabian Risk Thriller - Prequel
Used - Very Good
Paperback
Head of Zeus
2017-01-12
580
N/A
Book picture is for illustrative purposes only, actual binding, cover or edition may vary.
This is a used book - there is no escaping the fact it has been read by someone else and it will show signs of wear and previous use. Overall we expect it to be in very good condition, but if you are not entirely satisfied please get in touch with us
Trustpilot