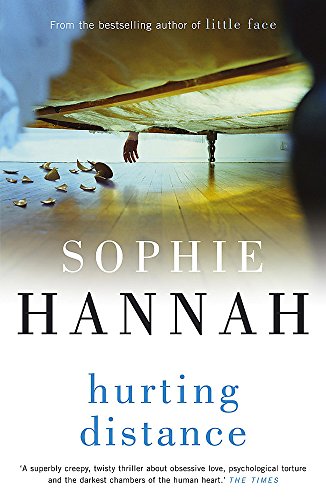 The second stunning thriller from queen of psychological crime, Sophie Hannah, perfect for fans of Clare Mackintosh and Paula Hawkins.

Sometimes love must kill before it can die.

Three years ago, something terrible happened to Naomi Jenkins - so terrible that she never told anybody.

Now Naomi has another secret - the man she has fallen passionately in love with, unhappily married Robert Haworth. When Robert vanishes without trace, Naomi knows he must have come to harm. But the police are less convinced, particularly when Robert's wife insists he is not missing.

In desperation, Naomi has a crazy idea. If she can't persuade the police that Robert is in danger, perhaps she can convince them that he is a danger to others. Then they will have to look for him - urgently. Naomi knows how to describe in detail the actions of a psychopath. All she needs to do is dig up her own troubled past . . .

A superbly creepy, twisty thriller about obsessive love, psychological torture, and the darkest chambers of the human heart * The Times *
Hair-raising psychological thriller * SHE *
An utterly gripping plot, this is the standout thriller of the year * Read of the Year, Elle *
Here's a psychological thriller that gets its hooks into you and refuses to let go * The Sunday Times *
Sophie Hannah's LITTLE FACE startled the British thriller market a year ago, and her new book is another superbly creepy foray in the genre. The plots are brilliant - I couldn't see through this one at all * Guardian *
Hurting Distance confirms Sophie Hannah as a rivetingly original arrival in crime fiction * The Sunday Times *
What makes this novel work so well is that more than one character has a bit of a screw loose - even the detectives on the case are grappling with some crippling personal issues - and it takes the full ride of the novel to find out who is playing whom. * Time Out *
Hannah's second novel is a beautifully written chiller-thriller about the after-effect of rape. It grips from start to finish. . . I couldn't put it down * Literary Review *
This is a far better-written book than any genre label might suggest. Hannah is a respected poet and uses the fascinating motif of the sundial not only to provide the reader with clues but to underline perceptions of life, time and death. It's also significant that she won a Daphne du Maurier award. Her powerful subjects of obsession with the past, and fear in the present, testify that she has made a transition to the narrative world of that iconic writer * Independent *
In the world of psychological thrillers, it is rare to come across a novel that conforms absolutely to the rules of the genre at the same time as being genuinely original, satisfyingly unpredictable and totally enthralling. This is what Sophie Hannah has achieved with Hurting Distance, and she's done it with considerable style. * Yorkshire Post *
This story is thrilling from the first page . . . This book is not simply a whodunnit. The snappy, witty dialogue and clarity make it a thoroughly entertaining read. I thought I had the whole book pegged after the first chapter, but how wrong I was. Pick it up, but be warned, you won't put it down * Birmingham Post *
Another success for this inventive writer * Sunday Telegraph *
Tale of obsession and manipulation * Sainsbury's *
Sophie Hannah is an internationally bestselling crime fiction writer, translated into 49 languages and published in 51 countries. Her psychological thriller The Carrier won the Specsavers National Book Award for Crime Thriller of the Year in 2013. Sophie is the author of the bestselling Poirot continuation mysteries. The Point of Rescue and The Other Half Lives have been adapted for television as Case Sensitive, starring Olivia Williams and Darren Boyd. Sophie is also a bestselling poet who has been shortlisted for the TS Eliot award. Her poetry is studied at GCSE and A-level. Sophie is an Honorary Fellow of Lucy Cavendish College, Cambridge. She lives in Cambridge with her family.
GOR000413696
9780340840344
034084034X
Hurting Distance: Culver Valley Crime Book 2 by Sophie Hannah
Sophie Hannah
Culver Valley Crime
Used - Very Good
Paperback
Hodder & Stoughton General Division
2007-08-23
432
N/A
Book picture is for illustrative purposes only, actual binding, cover or edition may vary.
This is a used book - there is no escaping the fact it has been read by someone else and it will show signs of wear and previous use. Overall we expect it to be in very good condition, but if you are not entirely satisfied please get in touch with us
Trustpilot