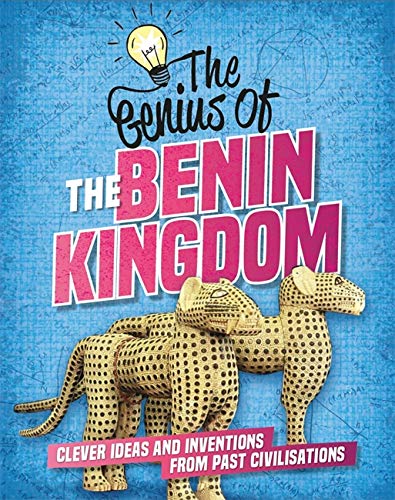 The Genius of: The Benin Kingdom by Sonya Newland

Exploring the major discoveries, inventions, influence and legacies of key periods in history

The Genius of: The Benin Kingdom: Clever Ideas and Inventions from Past Civilisations by Sonya Newland

Which genius ideas and inventions began in the Benin Kingdom? What did the people of the Benin Kingdom develop that we use to this day? Find out how a collection of separate villages and communities grew into a strong, united kingdom and developed a network of successful trading relationships. Discover the brilliant developments in town planning, language, art and medicine that have influenced the way we live today.

The Genius Of series helps children aged 9 plus to explore the major discoveries, inventions, influence and legacies of key periods in history. Titles in the 8-book series look at the genius of: the ancient Egyptians, the ancient Greeks, the Anglo-Saxons, the Benin Kingdom, the Maya, the Romans, the Stone, Bronze and Iron Ages and the Vikings.

Sonya Newland is an experienced author of children's books. She specialises in geography.
NGR9781445161266
9781445161266
1445161265
The Genius of: The Benin Kingdom: Clever Ideas and Inventions from Past Civilisations by Sonya Newland
Sonya Newland
The Genius of
New
Paperback
Hachette Children's Group
2020-08-13
32
N/A
Book picture is for illustrative purposes only, actual binding, cover or edition may vary.
This is a new book - be the first to read this copy. With untouched pages and a perfect binding, your brand new copy is ready to be opened for the first time
Trustpilot