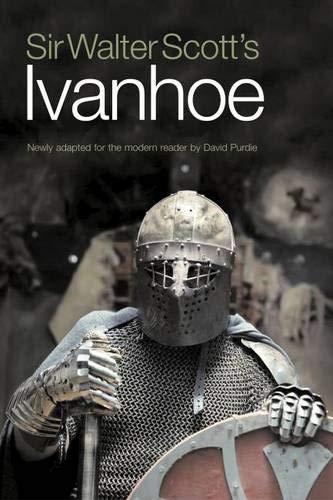 Archaic syntax and extraneous detail is stripped out of Sir Walter Scott's original to reveal the gripping story of Ivanhoe in a manner more suited to the modern reader.

Ivanhoe follows Wilfred of Ivanhoe, part of one of the few Saxon families at a time when English nobility was dominated by the Normans, who is out of favour with his father for his allegiance to the Norman king, Richard the Lionheart. The gripping storyline beautifully captures the 12th century tensions between Saxons and Normans, Nobility and Commonality and Jews and Gentiles, with a whole host of well-known characters from Robin Hood to Friar Tuck.

A curious exemplification of the power of a single book for good or harm is shown in the effects wrought by Don Quixote and those wrought by Ivanhoe. The first swept the world's admiration for the meiaeval chivalry-silliness out of existence; and the other restored it. - MARK TWAIN

[Ivanhoe] may have been badly wounded in combat - only to recover and save the day - but he has never been sliced up like this. - SCOTLAND ON SUNDAY

This is exactly what is needed in order to rescue Sir Walter Scott. - ALEXANDER McCALL SMITH

I applaud this new, shorter version of Ivanhoe which makes this wonderful novel, once so popular, accessible to a new generation of readers who will be able to enjoy its classic blend of history and romance. - PROFESSOR GRAHAM TULLOCH, Editor of the Edinburgh Edition of the Waverley novels

Professor David Purdie's meticulous adaption has made Sir Walter Scott's classic much more accessible to the modern reader... Purdie has managed to conserve Scott's masterly evocation of the 'sights, colours and sounds' of the Middle Ages. - EDINBURGH LIFE

David Purdie's inspired reworking of its complex characters, romance and high drama is an engrossing page-turner. - SCOTTISH REVIEW OF BOOKS

SIR WALTER SCOTT, 1st Baronet (15 August 1771-21 September 1932) was a Scottish historical novelist, playwright and poet, born in Edinburgh's Old Town. Despite the anonymous publication of his first novel, Waverley, Scott became the first Enlish-language author to have a truly international career in his own lifetime, with many contemporary readers in Europe, Australia and North America. His novels and poetry are still well-known, and many of his works including Rob Roy, The Lady of the Lake and The Heart of Midlothian are regarded as classics of literature. Ivanhoe was Scott's first novel to be set outwith Scotland, being positioned in late 12th Century England. It was allegedly published in 1819.

DAVID PURDIE was born in Prestwick and educated publicly at Ayr Academy and Glasgow University. Now a disused medical academic, he devotes what time is left to writing, lecturing and broadcasting. David is Editor-in-Chief of The Burns Encyclopaedia which deals with the life and work of the poet Robert Burns and is Chairman of the Sir Walter Scott Club of Edinburgh. He is in considerable demand as an after-dinner speaker, described in this role by the Daily Telegraph as `probably our best of the moment.' He now lives in Edinburgh.

GOR010512572
9781908373267
1908373261
Sir Walter Scott's Ivanhoe: Newly Adapted for the Modern Reader by David Purdie by Walter Scott
Walter Scott
Used - Like New
Paperback
Luath Press Ltd
2012-07-01
200
N/A
Book picture is for illustrative purposes only, actual binding, cover or edition may vary.
The book has been read, but looks new. The book cover has no visible wear, and the dust jacket is included if applicable. No missing or damaged pages, no tears, possible very minimal creasing, no underlining or highlighting of text, and no writing in the margins
Trustpilot