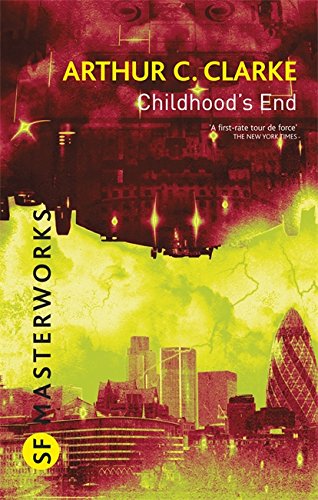 Arthur C. Clarke's classic in which he ponders humanity's future and possible evolution. Now a major TV series from SKY!

Arthur C. Clarke's classic in which he ponders humanity's future and possible evolution

When the silent spacecraft arrived and took the light from the world, no one knew what to expect. But, although the Overlords kept themselves hidden from man, they had come to unite a warring world and to offer an end to poverty and crime. When they finally showed themselves it was a shock, but one that humankind could now cope with, and an era of peace, prosperity and endless leisure began.

But the children of this utopia dream strange dreams of distant suns and alien planets, and begin to evolve into something incomprehensible to their parents, and soon they will be ready to join the Overmind ... and, in a grand and thrilling metaphysical climax, leave the Earth behind.

The colossus of science fiction. - New York Times.There has been nothing like it. - C.S Lewis.A novel about transcendence...generally recognised as Clarke's first major work...the story still moves me. - Science Fiction: The 100 Best Novels.The very personification of SF...he...always writes with lucidity and candour, often with grace, sometimes with a cold, sharp evocativeness that has produced some of the most memorable images in SF. - The Encyclopedia of Science Fiction.
Arthur C. Clarke was born in Minehead in 1917. During the Second World War he served as an RAF radar instructor, rising to the rank of Flight-Lieutenant. After the war he won a BSc in physics and mathematics with first class honours from King's College, London. One of the most respected of all science-fiction writers, he also won the KALINGA PRIZE, the AVIATION SPACE-WRITERS PRIZE,and the WESTINGHOUSE SCIENCE WRITING PRIZE. He also shared an OSCAR nomination with Stanley Kubrick for the screenplay of 2001: A SPACE ODYSSEY, which was based on his story, 'The Sentinel'. He lived in Sri Lanka from 1956 until his death in 2008.
NGR9780575082359
9780575082359
0575082356
Childhood's End by Sir Arthur C. Clarke
Sir Arthur C. Clarke
S.F. Masterworks
New
Hardback
Orion Publishing Co
2010-06-01
256
N/A
Book picture is for illustrative purposes only, actual binding, cover or edition may vary.
This is a new book - be the first to read this copy. With untouched pages and a perfect binding, your brand new copy is ready to be opened for the first time
Trustpilot