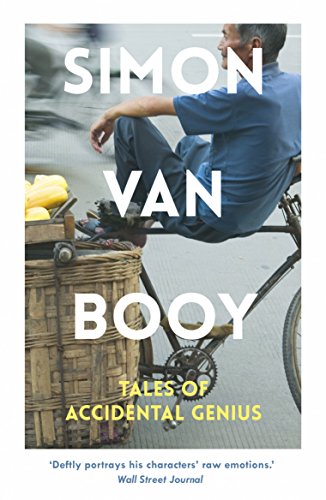 A master storyteller's vision reawakens us to the human experience in this diverse, haunting, and unexpectedly humorous new collection of short fiction from Simon Van Booy - his first since Love Begins in Winter, winner of the Frank O'Connor International Short Story Award.

In his first book of short stories since Love Begins in Winter, bestselling author Simon Van Booy offers a collection of stories highlighting how human genius can emerge through acts of compassion. Through characters including an eccentric film director, an aging Cockney bodyguard, the teenage child of Nigerian immigrants, a divorced amateur magician from New Jersey, and a Beijing street vendor who becomes an overnight billionaire, Tales of Accidental Genius contemplates individuals from different cultures and races-rich and poor, young and old-and reveals how faith and yearning for connection help us transcend loneliness, fear, and misfortune.

'There is a huge amount of skill involved in crafting these stories so perfectly - all perfectly formed and ready to eat like a delicious morsel of food, Simon Van Booy is a true master, and one whose work I'm very eager to sample more of in the future...For future reading I'll recommend Father's Day - by the same author, it's an incredibly moving read about the power of the relationship between parents and children, and is an in-depth and hugely skilled character study of the two characters whom the novel revolves around'.

'Van Booy writes with muted unsentimental elegance about the impulses that bind us together.'

'There is a deep and abiding humanism to these stories: people assisting others because the alternative is too grim to contemplate...For all of the globe-trotting and experiments in storytelling found here, there's also a very human core to these stories - a humanistic reminder of the connections we all share.'

'One of the beauties of all Van Booy's stories, including in his two prior stories collections and in two novels, is that he tells his stories without affectation, but ever so effectively as a stylist and a devout humanist. One amplifies the other, making his stories literary treasures.'

'From minimalistic sentences he wrings out maximum impact, stripping away artifice and elaboration in favor of stark, emotional clarity and honesty.'

'One of the most fascinating and arresting literary stylists writing fiction today.'

'Van Booy is a writer whose work I will forever eagerly read.'

'The uncanny beauty of Van Booy's prose, and his ability to knife straight to the depths of a character's heart, fill a reader with wonder.'

'A moving, humorous and engaging look at the ways people lean on and support one another. The first six stories fit together like houses on a street... [an] enthralling collection.'

'One of the best living short story writers gives us a collection of six beautifully written stories and a novella that search for the genius in common places and everyday deeds by way of poetic prose.'

Simon Van Booy is the author of seven books including The Secret Lives of People in Love, andthe international bestseller The Illusion of Separateness. He is the editor of three philosophy books and has written for The New York Times, The Guardian, The Telegraph, The Financial Times, and the BBC. His work has been translated into seventeen languages. He lives in Brooklyn with his wife and daughter.

GOR007816836
9781780749716
1780749716
Tales of Accidental Genius by Simon Van Booy
Simon Van Booy
Used - Very Good
Paperback
Oneworld Publications
20160707
272
N/A
Book picture is for illustrative purposes only, actual binding, cover or edition may vary.
This is a used book - there is no escaping the fact it has been read by someone else and it will show signs of wear and previous use. Overall we expect it to be in very good condition, but if you are not entirely satisfied please get in touch with us
Trustpilot