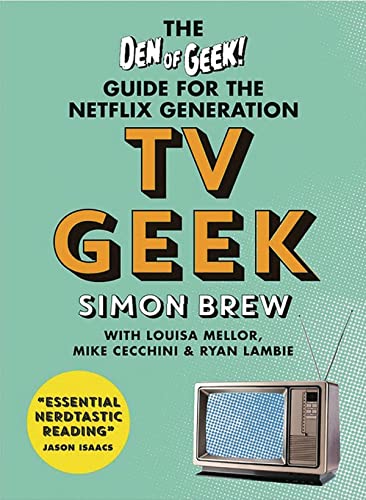 Get sucked in to the world of box-sets, bingewatching and addictive insider anecdotes with this comprehensive guide to the small screen, brought to you by the people behind the Den of Geek website.

TV Geek: The Den of Geek Guide for the Netflix Generation by Simon Brew

From the author of Den of Geek, this is the ultimate, nerdy television guide for TV geeks everywhere!

TV Geek recounts the fascinating stories of cult-classic series, reveals the nerdy Easter eggs hidden in TV show sets, and demonstrates the awe-inspiring power of fandom, which has even been known to raise TV series from the dead.

Includes:
- How the live-action Star Wars TV show fell apart
- The logistics and history of the crossover episode
- The underrated geeky TV shows of the 1980s
- The hidden details of Game of Thrones
- Five Scandinavian crime thrillers that became binge hits
- The Walking Dead, and the power of fandom

TV series are now as big as Hollywood movies with their big budgets, massive stars, and ever-growing audience figures! TV Geek provides an insightful look at the fascinating history, facts and anecdotes behind the greatest (and not-so-great) shows.

Den of Geek is a leading entertainment website, attracting over 10 million readers every month. Springing to life in the UK back in 2007, it's grown into one of the most popular sites of its type, with bases in the UK and US. Its pages are packed with news, features, interviews, reviews and pretty pictures. Furthermore, Den Of Geek strives to find different angles and quirky insights into films, TV shows and games, with contributors and experts from around the world writing for the site. Boasting new nerdy material added daily, and a huge archive of articles to explore, the site continues to grow. Its writers, meanwhile, continue to consume generous amounts of coffee.

Simon Brew is the founder and UK editor-in-chief of Den of Geek.

GOR009733711
9781788400732
1788400739
TV Geek: The Den of Geek Guide for the Netflix Generation by Simon Brew
Simon Brew
Used - Very Good
Paperback
Octopus Publishing Group
2018-10-04
240
N/A
Book picture is for illustrative purposes only, actual binding, cover or edition may vary.
This is a used book - there is no escaping the fact it has been read by someone else and it will show signs of wear and previous use. Overall we expect it to be in very good condition, but if you are not entirely satisfied please get in touch with us
Trustpilot