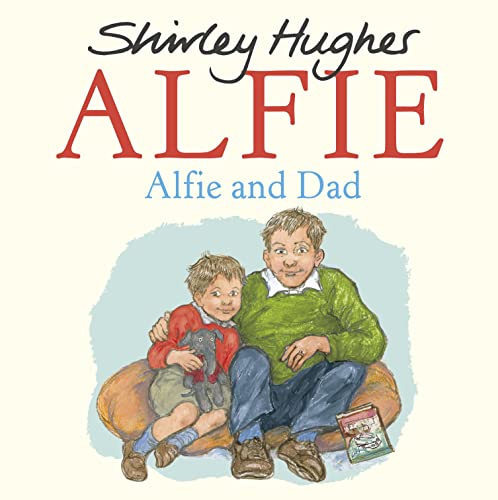 Alfie and Dad by Shirley Hughes

Join Alfie and Dad as they spend time together in this wonderful collection of stories from the award-winning Shirley Hughes. he's there to find Alfie's favourite toy Flumbo when he gets left on the bus; and most of all he loves spending time with his children and they love spending time with him!

Alfie and Dad by Shirley Hughes

Join Alfie and Dad as they spend time together in this wonderful collection of stories from the award-winning Shirley Hughes.

Celebrating that special relationship between children and their dads.

That rare jewel, a brilliant "Dad" book... fabulous stuff as ever from Shirley Hughes. * Read it, Daddy *
In the run-up to Shirley Hughes's 90th birthday, this volume assembles stories in which Alfie's father helps his son: by sharing weekend activities, checking under the bed for flying loobies, retrieving a toy from lost property, finding a wandering cat's real home. Hughes makes the domestic blissful. * The Sunday Times *

Shirley Hughes (Author, Illustrator)
Shirley was born in West Kirby, near Liverpool, and studied fashion and dress design at Liverpool Art School, before continuing her studies at the Ruskin School of Drawing and Fine Art in Oxford. She then embarked on a career as a freelance illustrator in London, where she still lives today. She illustrated other writers' work, including Noel Streatfeild, Alison Uttley, Ian Seraillier, Margaret Mahy and notably Dorothy Edwards's My Naughty Little Sister series.

Shirley began to write and draw her own picture books when her children were young. Her first book - Lucy and Tom's Day - was published in 1960, and she followed it with, among others, Dogger and the Alfie series.

Shirley Hughes has won the Other Award, the Eleanor Farjeon Award, and the Kate Greenaway Medal for Illustration twice, for Dogger in 1977 and for Ella's Big Chance in 2003. In 2007 Dogger was voted the public's favourite Greenaway winner of all time. Shirley received an OBE in 1999 for services to Children's Literature, and a CBE in 2017. She is the first recipient of Booktrust's Lifetime Achievement Award.

GOR009134975
9781782956914
1782956913
Alfie and Dad by Shirley Hughes
Shirley Hughes
Alfie
Used - Very Good
Paperback
Penguin Random House Children's UK
2018-05-17
32
N/A
Book picture is for illustrative purposes only, actual binding, cover or edition may vary.
This is a used book - there is no escaping the fact it has been read by someone else and it will show signs of wear and previous use. Overall we expect it to be in very good condition, but if you are not entirely satisfied please get in touch with us
Trustpilot