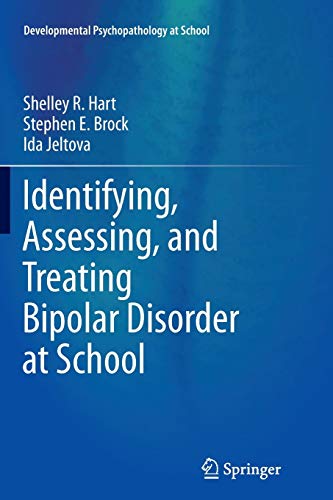 Identifying, Assessing, and Treating Bipolar Disorder at School presents child and education practitioners with an evidence-based framework for accurate identification, assessment, and intervention of bipolar disorder.

Identifying, Assessing, and Treating Bipolar Disorder at School presents child and education practitioners with an evidence-based framework for accurate identification, assessment, and intervention of bipolar disorder. This straightforward resource clears up misconceptions about the condition, and outlines its complex presentation in young people, where it may appear in tandem with other disorders and bring challenges to treatment. By providing information to assist in referrals, consultations, and recommendations for special education, the authors give the reader a unique vantage point for improving students' learning environment and helping to facilitate the work of fellow professionals.

Shelley R. Hart, Ph.D., is currently a postdoctoral fellow at Johns Hopkins University in the Psychiatric Epidemiology Training Program, Department of Mental Health, Bloomberg School of Public Health. Her research at Hopkins has focused on individuals with emotional and behavioral challenges, specifically those with bipolar disorder or with suicidal thoughts and behaviors. Her academic preparation consists of undergraduate and graduate degrees in Psychology, with a Master of the Arts in Education from the California State University, Sacramento (school psychology credential) followed by a doctorate from the University of California, Santa Barbara in the Department of Counseling, Clinical and School Psychology.

Prior to her graduate studies, Dr. Hart spent a number of years in the mental health arena working with severely impaired individuals in psychiatric facilities or transitioning to the community. Her desire to intervene earlier in the progression of mental health challenges led her to school psychology, and she practiced in schools in Northern California for several years. Dr. Hart has focused her career on children and youth with emotional and behavioral challenges, particularly the intersection between mental health and the educational context; that is, promoting successful experiences for this underserved population in the schools. Her scholarly activities include manuscripts, articles and book chapters, as well as local, state, and national presentations related to these topics.

Stephen E. Brock, Ph.D., is a Professor and the School Psychology Program Coordinator at California State University, Sacramento (CSUS). His professional preparation includes undergraduate and graduate degrees in psychology, and a Ph.D. in Education (with an emphasis in psychological studies) from the University of California, Davis, where he researched Attention-deficit/Hyperactivity Disorder.

A member of the National Association of School Psychologists (NASP) since 1985, Dr. Brock currently serves as the Association's President-Elect, as a Contributing Editor to the Communique (the NASP newsletter), is on the Editorial Advisory Board of the School Psychology Review, is a member of the National Emergency Assistance Team, and is co-chair of the PREPaRE Crisis Prevention and Intervention Training Curriculum workgroup. In addition, he previously served as the California representative to the NASP Delegate Assembly, the Western Region Representative to the NASP Executive Council, and Coordinator of the Crisis Management Interest Group. He was the lead editor of the NASP publication Best Practices in School Crisis Prevention and Intervention and lead author of School Crisis Prevention and Intervention: The PREPaRE Model.

At the state level, Dr. Brock is a past president of the California Association of School Psychologists (CASP). Previously, he served CASP as the Region X representative, the Employment Relations Specialist, the Convention Chairperson, was on the editorial board of CASP Today (the CASP newsletter), and was an Associate Editor of The California School Psychologist.

Ida Jeltova, Ph.D., is a licensed psychologist with extensive research and clinical experience working with individuals who are facing challenges with self-regulation. Until recently Dr. Jeltova focused on research and teaching at the Graduate Center, City University of New York. Starting in 2012, Dr. Jeltova is exclusively focusing on clinical work and advocacy for families with children with emotional and behavioral challenges. Her work combines biological and psychological dimensions and focuses on developing psychological interventions to optimize and harmonize child-family and child-environment match. Dr. Jeltova has extensive experience in working with adoptive families, including post-institutionalized and foster care children. She is an active member at the Adoption and Foster Care Therapist Network.