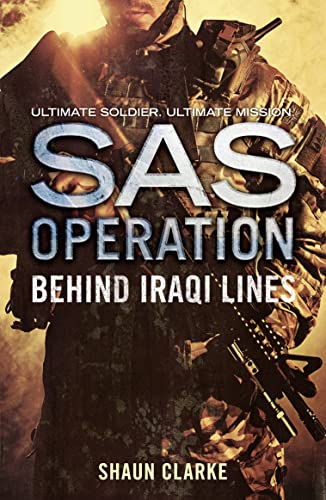 Behind Iraqi Lines by Shaun Clarke

Ultimate soldier. Ultimate mission. But will the SAS survive the inferno of Operation Desert Storm?

Ultimate soldier. Ultimate mission. But will the SAS survive the inferno of Operation Desert Storm?

August 1990, and Iraqi tanks are rolling into Kuwait, putting one quarter of the world's oil reserves at risk. So begins Operation Desert Storm.

As specialists in desert warfare, the legendary SAS are plunged into a maelstrom of covert operations, often deep inside enemy territory. Their mission: reconnaissance, espionage, sabotage, the capture of prisoners and rescue of hostages.

Some are captured and tortured; others executed. But by the end of the conflict they will perform feats that are the stuff of legend. Join the adventure in this novel about the most daring soldiers in military history: the SAS!

`Shaun Clarke' is the pen name of a British author who emigrated to Australia aged 19, serving for 6 years in the Royal Australian Air Force. Returning to England, he lived in London for twenty years before moving to Ireland.

GOR007345023
9780008141325
0008141320
Behind Iraqi Lines (SAS Operation) by Shaun Clarke
Shaun Clarke
SAS Operation
Used - Very Good
Paperback
HarperCollins Publishers
2016-01-25
208
N/A
Book picture is for illustrative purposes only, actual binding, cover or edition may vary.
This is a used book - there is no escaping the fact it has been read by someone else and it will show signs of wear and previous use. Overall we expect it to be in very good condition, but if you are not entirely satisfied please get in touch with us
Trustpilot