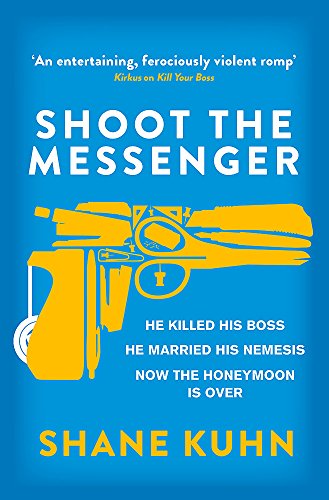 Professional assassin John Lago faces off against his deadliest adversary yet - his wife - in Shane Kuhn's second Tarantinoesque, rollercoaster-on-a-sugar-high thriller

The object of his affection is Alice, who also happens to be John's nemesis, a fellow killer, and now the wife he never knew he wanted. Together, this thrill-seeking, lethal couple aim to take over John's former employers Human Resources Inc - a group of assassins who get close to their high-profile targets in the guise of office interns.

But an anonymous tip about an FBI mole in the organisation drives a wedge between the happy couple and all hell breaks loose in a hail of bullets.

Til death do us part.

Published in the US as Hostile Takeover.

Will keep you riveted, from its taut opening pages to its explosive, cinematic ending * Boston Globe *
Shane Kuhn is a writer and filmmaker with twenty years of experience working in the entertainment business and the ad world. In feature film, he has written screenplays for Universal, Paramount, Sony, and Fox, and he has written and directed a film for Lionsgate. In the world of independent film, he is one of the four original founders of the Slamdance Film Festival and currently serves as an Executive Board member of Slamdance, Inc. A shameless product pusher in the ad world, he has worked as a copywriter, creative director, and broadcast video director and producer for several notable brands. Throughout his life, writing has been his shrink, priest, whore and best mate.
GOR007218708
9780751561715
0751561711
Shoot the Messenger by Shane Kuhn
Shane Kuhn
A John Lago Thriller
Used - Very Good
Paperback
Little, Brown Book Group
2015-07-14
256
N/A
Book picture is for illustrative purposes only, actual binding, cover or edition may vary.
This is a used book - there is no escaping the fact it has been read by someone else and it will show signs of wear and previous use. Overall we expect it to be in very good condition, but if you are not entirely satisfied please get in touch with us
Trustpilot