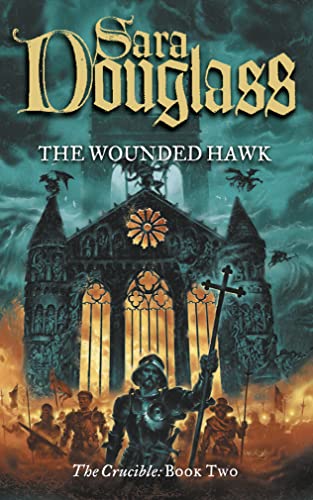 The Wounded Hawk by Sara Douglass

The second book of The Crucible, an exciting new historical fantasy from the author of the popular Axis Triology.

The Wounded Hawk (The Crucible Trilogy, Book 2) by Sara Douglass

The second book of The Crucible, an exciting new historical fantasy from the author of the popular Axis Triology.

The plague has passed and for a while it seems evil has been defeated. Europe recovers; prosperity returns, trade resumes, and people slowly recover from the effects of the plague.

Then, just as the Church relaxes its guard, war spreads across Europe. Widespread heresies challenge the authority of the Church. Revolts and rebellions threaten to topple the established monarchies and overturn the social order of Europe. And then the plague returns, worse than ever.

Neville eventually discovers the cause. The minions of the Devil have been scattered throughout European society during the confusion of the Black Death. His task is to discover the identities of these shapeshifters so that the Church can move against them, but it is a dangerous task. They are master shapeshifters so he can never be certain of who he should trust.

Praise for previous books in The Axis Trilogy:

GOR000985628
9780007108473
0007108478
The Wounded Hawk (The Crucible Trilogy, Book 2) by Sara Douglass
Sara Douglass
The Crucible Trilogy
Used - Very Good
Paperback
HarperCollins Publishers
2002-04-15
624
Winner of Aurealis Award for Excellence in Fiction: Best Fantasy Novel 2001
Book picture is for illustrative purposes only, actual binding, cover or edition may vary.
This is a used book - there is no escaping the fact it has been read by someone else and it will show signs of wear and previous use. Overall we expect it to be in very good condition, but if you are not entirely satisfied please get in touch with us
Trustpilot