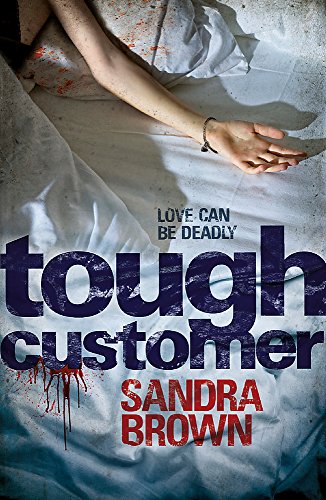 That's why he's the first person Caroline King - who after a thirty-year separation continues to haunt his dreams - asks for help when a deranged stalker attempts to murder their daughter . . . the daughter Dodge has never met. He has a whole bagful of grudging excuses for wishing to ignore Caroline's call, and one compelling reason to drop everything: guilt.

His daughter Berry has become the object of desire of a co-worker, a madman and genius with a penchant for puzzles and games who had spent the past year making Berry's life hell, and who now has vowed to kill her.

The heart-pounding situation goes from bad to worse when the stalker begins to claim other victims and leaves an ominous trail of clues as he lethally works his way toward Berry.

From the acclaimed international bestselling author Sandra Brown, TOUGH CUSTOMER is a thrilling tale about obsession and murder, the fragile nature of relationships, and, possibly, second chances.

'Suspense that has teeth'
Stephen King

Praise for Sandra Brown * : *
'It's a great, entertaining read, with lots of surprising twists and turns, credibly flawed characters and a love affair that's as steamy as a Savannah summer.' * Lisa Scottoline, Washington Post on RICOCHET *
'A masterful storyteller, carefully crafting tales that keep readers on the edge of their seats' * USA Today *
Perfectly plotted * People Magazine *
'An edge-of-seat thriller that's full of twists . . . Top stuff!' * Star *
Fast fun * Cosmopolitan *
Millions of readers clamour for the compelling novels of Sandra Brown. And no wonder! She fires your imagination with irresistible characters, unexpected plot twists, scandalous secrets . . . so electric you feel the zing * Literary Guild *
If you want romantic suspense that has teeth . . . Sandra Brown is your gal. * Stephen King *
'Brown's novels define the term page turner' * Booklist *
Sandra Brown is the author of numerous New York Times bestselling thrillers. She lives in Arlington, Texas. Visit her website at www.sandrabrown.com and connect with her on Twitter: @SandraBrown_NYT
GOR002603676
9781444709421
1444709429
Tough Customer by Sandra Brown
Sandra Brown
Used - Very Good
Paperback
Hodder & Stoughton
2011-02-17
400
N/A
Book picture is for illustrative purposes only, actual binding, cover or edition may vary.
This is a used book - there is no escaping the fact it has been read by someone else and it will show signs of wear and previous use. Overall we expect it to be in very good condition, but if you are not entirely satisfied please get in touch with us
Trustpilot