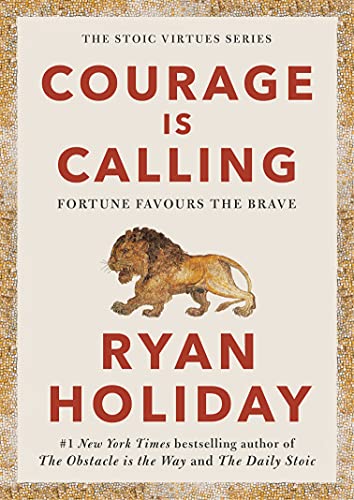 Courage Is Calling by Ryan Holiday

Courage Is Calling: Fortune Favours the Brave by Ryan Holiday

'An urgent call to arms for each and all of us.' Matthew McConaughey An inspiring anthem to the power, promise, and challenges of courage, the first in a series examining the timeless Stoic virtues from #1 New York Times bestselling author Ryan Holiday Fortune favours the bold. All great leaders of history have known this, and were successful because of the risks they dared to take. But today so many of us are paralysed by fear. Drawing on ancient Stoic wisdom and examples across history and around the world, Ryan Holiday shows why courage is so important, and how to cultivate it in our own lives. Courage is not simply physical bravery but also doing the right thing and standing up for what you believe; it's creativity, generosity and perseverance. And it is the only way to live an extraordinary, fulfilled and effective life. Everything in life begins with courage. This book will equip you with the bravery to begin.
Worthy for anyone trying to develop their own code, this is a superb handbook for crafting a purposeful life. Masterfully composed and highly readable, using stories from antiquity to the modern-day realities confronting all leaders, the 'march' of the chapters brings forward valuable gems on each page of the journey. Holiday's themes will remain with you and strengthen you long after you finish reading it. -- General Jim Mattis, General, U.S. Marines (ret.) and 26th Secretary of Defense
Ryan Holiday's Courage is Calling traces the history of courage and its many faces through the ages and arrives at the present day with an urgent call to arms for each and all of us. As we battle our enemies within and without, will we choose to rise-up to the call of our courage or blush and bow down to the whispers of our cowardice? Our answer to this question is about more than our sense of duty, it's about our freedom. It's about more than wins and losses, it's about our survival. It's on me, it's on you, it's on us. Take the dare we may. -- Matthew McConaughey, Academy Award Winning Actor and New York Times #1 best-selling author
[Courage Is Calling] dresses us with the proper garments of courage, something we need more than ever. -- George Raveling
Ryan Holiday shows his own courage in this book to not toe the line, to speak truth to power, and show us all why we must not defer to fear if we are to go forward together with grace and humanity. Drawing on examples across history--from the ancient Greek and Roman world to Florence Nightingale to his own critique of 'hollow courage' in our own times, Holiday shows why virtue matters now more than ever. -- Nancy Sherman, Professor of Philosophy at Georgetown University
In a world full of people riddled with fears and deeply afraid of sticking their necks out, our salvation lies in cultivating courage in all arenas of life. In this book Ryan Holiday has provided a clear and inspiring guide for how to develop this highest of human virtues. -- Robert Greene, #1 New York Times bestselling author * The 48 Laws of Power *
In this clarion call to act on your convictions, Holiday draws on a remarkable range of figures from Socrates to Solzhenitsyn. A heartfelt and passionate book. -- Shadi Bartsch, author and translator * The Aeneid *
A superb handbook for crafting a purposeful life. -- General Jim Mattis, General, U.S. Marines (ret.) and 26th Secretary of Defense
Ryan Holiday is among the most psychologically wise writers I know. -- Angela Duckworth, bestselling author of Grit
Ryan Holiday is one of his generation's finest thinkers -- Steven Pressfield, author of The War of Art
[Ryan Holiday is a] self-help sage, who is now a sought-after guru to NFL coaches, Olympians, hip-hop stars, and Silicon Valley entrepreneurs . . . [he] translates Stoicism, which had counted emperors and states men among its adherents during antiquity, into pithy catchphrases and digestible anecdotes for ambitious, twenty-first-century life hackers. * New York Times *
I don't have many rules in life, but one I never break is: If Ryan Holiday writes a book, I read it as soon as I can get my hands on it. -- Brian Koppelman, screenwriter and director, Rounders, Ocean's Thirteen and Billions
Ryan Holiday is one of the world's foremost thinkers and writers on ancient philosophy and its place in everyday life. His books have sold over 3 million copies worldwide, and include The Obstacle is the Way; Ego is the Enemy; Stillness is the Key and The Daily Stoic.
GOR011773041
9781788166270
1788166272
Courage Is Calling: Fortune Favours the Brave by Ryan Holiday
Ryan Holiday
Used - Like New
Hardback
Profile Books Ltd
20210928
304
N/A
Book picture is for illustrative purposes only, actual binding, cover or edition may vary.
The book has been read, but looks new. The book cover has no visible wear, and the dust jacket is included if applicable. No missing or damaged pages, no tears, possible very minimal creasing, no underlining or highlighting of text, and no writing in the margins
Trustpilot