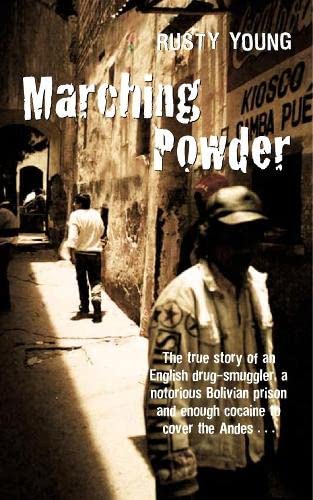 A gripping, sometimes surreal account of surviving one of the world's craziest and most dangerous prisons.

MARCHING POWDER is the story of Thomas McFadden, a small-time English drug smuggler who was arrested in Bolivia and thrown inside the notorious San Pedro prison. He found himself in a bizarre world, the prison reflecting all that is wrong with South American society. Prisoners have to pay an entrance fee and buy their own cells (the alternative is to sleep outside and die of exposure), prisoners' wives and children often live inside too, high quality cocaine is manufactured and sold from the prison.

Thomas ended up making a living by giving backpackers tours of the prison - he became a fixture on the backpacking circuit and was named in the Lonely Planet guide to Bolivia. When he was told that for a bribe of $5000 his sentence could be overturned, it was the many backpackers who'd passed through who sent him the money. Sometimes shocking, sometimes funny, MARCHING POWDER is an always riveting story of survival.

`All the staples of the prison memoir are here: sadistic guards, an attempted break-out, the terrors of solitary confinement, the joys of freedom . . . The result is a truly gripping piece of testimony' Sunday Telegraph

`This exotic, cautionary yarn opens the abyss beneath our wealthy world' Uncut

Rusty Young is an Australian lawyer who met Thomas McFadden on a tour of San Pedro. He was so impressed by him that he stayed there (voluntarily) for three months in order to write his story. Thomas McFadden is now a free man, living in London.
GOR001221352
9780330419581
0330419587
Marching Powder by Rusty Young
Rusty Young
Used - Very Good
Paperback
Pan Macmillan
2004-07-02
384
N/A
Book picture is for illustrative purposes only, actual binding, cover or edition may vary.
This is a used book - there is no escaping the fact it has been read by someone else and it will show signs of wear and previous use. Overall we expect it to be in very good condition, but if you are not entirely satisfied please get in touch with us
Trustpilot