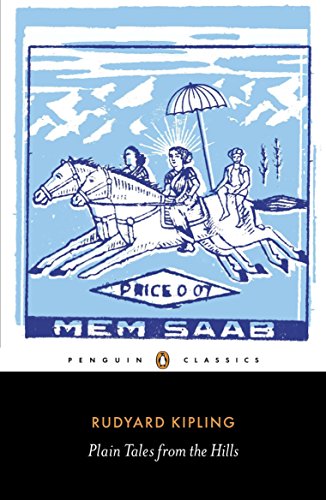 Plain Tales from the Hills by Rudyard Kipling

A collection of short stories, including "Lispeth", "Beyond the Pale" and "In the Pride of His Youth".

Plain Tales from the Hills by Rudyard Kipling

Plain Tales from the Hills, Rudyard Kipling's first collection of short stories, established his reputation and brought India to the British imagination. Including the stories 'Lispeth', 'Beyond the Pale' and 'In the Pride of His Youth', they tell of soldiers, wise children, exiles, forbidden romances and divided identities, creating a rich portrait of Anglo-Indian society. Originally published for a newspaper in Lahore when Kipling was a journalist, the tales were later revised by him to re-create as vividly as possible the sights and smells of India for readers at home. Far from being a celebration of empire, these stories explore the barriers between races, classes and sexes, and convey all the tensions and contradictions of colonial life.
By the Winner of the Nobel Prize in Literature

RUDYARD KIPLING was born in Bombay in 1865. In 1882 Kipling started work as a journalist in India, and while there produced a body of work, stories, sketches and poems - notably Plain Tales from the Hills (1888) - which made him an instant literary celebrity when he returned to England in 1889. His most famous works include The Jungle Book (1894), Kim (1901) and the Just So Stories (1902). Kipling refused to accept the role of Poet Laureate and other civil honours, but he was the first English writer to be awarded the Nobel Prize, in 1907. He died in 1936.

KAORI NAGAI is a Research Associate at the University of Kent and author of Empire of Analogies (2006). She has also written the introduction to Kobo Abe's Face of Another for Modern Classics.

GOR003043179
9780141442396
0141442395
Plain Tales from the Hills by Rudyard Kipling
Rudyard Kipling
Used - Very Good
Paperback
Penguin Books Ltd
2011-03-03
336
N/A
Book picture is for illustrative purposes only, actual binding, cover or edition may vary.
This is a used book - there is no escaping the fact it has been read by someone else and it will show signs of wear and previous use. Overall we expect it to be in very good condition, but if you are not entirely satisfied please get in touch with us
Trustpilot