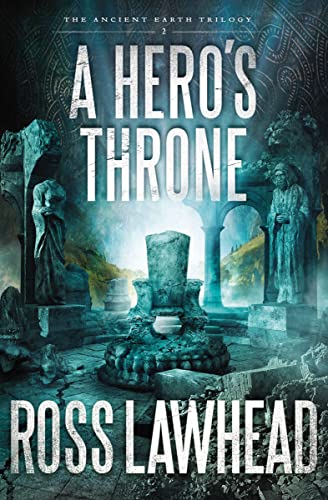 A Hero's Throne by Ross Lawhead

"Knights of Ennor---the time has come to awake. Rise up to fulfill your secret oath and sacred duty."

A Hero's Throne by Ross Lawhead

"Knights of Ennor-the time has come to awake. Rise up to fulfill your secret oath and sacred duty."

Deep beneath the streets of England lies another realm . . . one few in our modern world know exists. Daniel and Freya, however, know it all too well. Eight years ago, these friends first journeyed through portals into the hidden land of Nidergeard-discovering a city filled with stones, secrets, and sleeping knights that serve to protect the world they call home.

But Nidergeard has fallen to dark forces, overrun by its enemies. Gates are being opened between the worlds that should have been kept closed. The battle lines for the war at the end of time have been drawn, and opposing forces are starting to gather.

Having served for centuries as the first and last outpost at the borders to other worlds, Nidergeard must be reclaimed and the mystery of its fall discovered. Daniel and Freya, along with an ancient knight and a Scottish police officer, must return to the legendary city, rally the surviving citizens, and awaken the sleeping knights-knights who are being killed, one by one, as they sleep.

But time is running out faster than they know.

Ross Lawhead was born in America but grew up in England. He studied screenplay writing at Bournemouth University before moving on to pencil the !Hero graphic novel and coauthor the !Hero novel trilogy with his father. He has also coauthored humorous books of poetry and created a theological superhero. Find him at rosslawhead.com/blog.
GOR007480075
9781595549105
1595549102
A Hero's Throne by Ross Lawhead
Ross Lawhead
An Ancient Earth
Used - Very Good
Paperback
Thomas Nelson Publishers
2012-12-05
336
N/A
Book picture is for illustrative purposes only, actual binding, cover or edition may vary.
This is a used book - there is no escaping the fact it has been read by someone else and it will show signs of wear and previous use. Overall we expect it to be in very good condition, but if you are not entirely satisfied please get in touch with us
Trustpilot