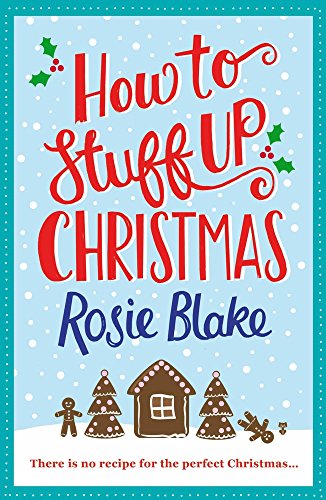 How to Stuff Up Christmas by Rosie Blake

Christmas and cooking collide in this hilarious romantic comedy from Rosie Blake.

A hilarious and heart-warming novel about Christmas, catastrophes and cooking, containing exclusive Christmas recipes, from the talented Rosie Blake.

**How to Stuff Up Christmas includes 14 fabulous, tasty Christmas recipes throughout**

How to Stuff Up Christmas by Rosie Blake

A hilarious and heart-warming novel about Christmas, catastrophes and cooking, containing exclusive Christmas recipes, from the talented Rosie Blake.

**How to Stuff Up Christmas includes 14 fabulous, tasty Christmas recipes throughout**

'Tis the season to be jolly. Unless you've found an intimate picture of another woman on your fiance's phone...

Eve is heartbroken after discovering her fiance is cheating on her. Being surrounded by the joys of Christmas is more than Eve can bear, so she chooses to avoid the festivities by spending Christmas alone on a houseboat in Pangbourne. Eve gets gets an unexpected seasonal surprise when handsome local vet Greg comes to her rescue one day, and continues to visit Eve's boat on a mission to transform her from Kitchen Disaster Zone to Culinary Queen.

But where does Greg keep disappearing to? What does Eve's best friend Daisy know that she isn't telling? And why is there an angry goose stalking Eve's boat?

Rosie Blake spent her university years writing pantomimes based on old classics, including 'The Wizard of Odd: Search for the Ruby Strippers' and 'Harry Potter: The Musical' (complete with moving opening number, 'In my Cupboard I will Stay'). Rosie went on to write a winning short story in the La Senza/Little Black Dress Short Story Competition, and features for Cosmopolitan magazine, before turning to books.

Rosie likes baked items, taking long walks by the river and speaking about herself in the third person.

GOR007079833
9781782398608
1782398600
How to Stuff Up Christmas by Rosie Blake
Rosie Blake
Used - Very Good
Paperback
Atlantic Books
2015-11-05
336
N/A
Book picture is for illustrative purposes only, actual binding, cover or edition may vary.
This is a used book - there is no escaping the fact it has been read by someone else and it will show signs of wear and previous use. Overall we expect it to be in very good condition, but if you are not entirely satisfied please get in touch with us
Trustpilot