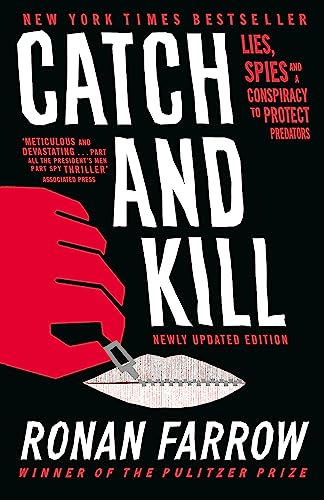 Catch and Kill by Ronan Farrow

In a dramatic account of violence and espionage, Pulitzer Prize-winning investigative reporter Ronan Farrow exposes serial abusers and a cabal of powerful interests hell-bent on covering up the truth, at any cost.

Catch and Kill: Lies, Spies and a Conspiracy to Protect Predators by Ronan Farrow

In 2017, a routine network television investigation led Ronan Farrow to a story only whispered about: one of Hollywood's most powerful producers was a predator, protected by fear, wealth and a conspiracy of silence. As Farrow drew closer to the truth, shadowy operatives, from high-priced lawyers to elite war-hardened spies, mounted a secret campaign of intimidation, threatening his career, following his every move and weaponizing an account of abuse in his own family.

All the while, Farrow and his producer faced a degree of resistance that could not be explained - until now. And a trail of clues revealed corruption and cover-ups from Hollywood, to Washington and beyond.

This is the untold story of the exotic tactics of surveillance and intimidation deployed by wealthy and connected men to threaten journalists, evade accountability and silence victims of abuse - and it's the story of the women who risked everything to expose the truth and spark a global movement.

Both a spy thriller and a meticulous work of investigative journalism, Catch and Kill breaks devastating new stories about the rampant abuse of power - and sheds far-reaching light on investigations that shook the culture.

[A] scoop-filled book, part reporting memoir, part spy thriller . . . Riveting and often shocking . . . Catch and Kill has gone off like a hand grenade in the world of New York media . . . compelling * Sunday Times *
A thriller. My word, you thirst for more . . . Catch and Kill is a rip-roaring account of the years spent chasing the Weinstein story and its spin-offs. It's a deep dive into the world of US media, Hollywood pay-outs, Donald Trump's eccentric ways, spies and spineless editors. And is it gripping . . . The page-turner, as illustrated by Farrow's Weinstein confrontation, is dripping with jaw-dropping revelations and moments of astonishing pathos . . . Farrow's reporting is incredibly rigorous. He has spoken, he said, to over 200 sources. It's evident in the book; the breadth of the story is staggering. He has the private eyes and the NYPD, the accusers and the whistleblowers. It's a rollicking read; I found myself laughing out loud, aghast, at the details, or else reading out segments to colleagues. Not since Michael Wolff's Fire and Fury - an eye-watering account of life inside the White House, in the first months of the Trump presidency - has a book so comprehensively lifted the lid on something so troubling * Telegraph *
Farrow knows he has a humdinger of a story, but he also has a nuanced appreciation of how women are smeared and discredited, of how the lines dividing news and show business have blurred . . . lively and wide-ranging * The Times *
Extraordinary . . . As some American critics have already observed, Farrow's narrative has the pace of a thriller . . . Farrow's book captures the terror and paranoia that eat away at Weinstein's victims for the simple reason that he comes to experience them himself, a human mirror. The producer's sphere of influence extends ever outwards, like the powerful arms of some giant squid -- Rachel Cooke * Observer *
Meticulous and devastating . . . Catch and Kill is part All the President's Men, part spy thriller * Associated Press *
Moves at a brisk pace, feeding readers each revelation in real time, interspersed with personal notes that make the stories stick -- Claire Landsbaum * Vanity Fair *
Read this book . . . Farrow's greatest success was to listen, believe and act, even at his own peril -- Maria L. La Ganga * Los Angeles Times *
Absorbing . . . The behavior documented in Catch and Kill is obviously and profoundly distressing . . . But there are some hopeful threads, too -- Jennifer Szalai * New York Times *
Darkly funny and poignant . . . a winning account of how it feels to be at the centre of the biggest story in the world. It is also, of course, a breathtakingly dogged piece of reporting, in the face of extraordinary opposition -- Emma Brockes * Guardian *
At the heart of every great noir is a conspiracy of evil that imbues the initial crime uncovered by the hero with a weightier resonance than was immediately obvious. So it goes with Catch and Kill -- Emma Bruenig * Washington Post *
Reads like a thriller ...The reveal in Catch and Kill is not that there are corrupt people; it's that corrupt people are in control of our media, politics, and entertainment and that, in fact, many of them remain in control -- Rebecca Traister * The Cut *
The year's best spy thriller is stranger - and more horrifying - than fiction . . . He weaves a breathless narrative as compelling as it is disturbing . . . bracingly exposes the rot that's persisted across elite American institutions for decades -- David Canfield * Entertainment Weekly *
Engrossing * Hollywood Reporter *
Catch and Kill is exhaustively reported . . . and compulsively readable, with nearly every page revealing a provocative detail about a household name in media or entertainment -- E. J. Dickson * Rolling Stone *
Humour is the impressive and, indeed, surprising quality found in this meticulous account of how Farrow helped bring down Harvey Weinstein in 2017 . . . An essential account of the story that will scar Hollywood for years * Sunday Times *
Gripping * i *
Gripping and humorous * Mail on Sunday *
Ronan Farrow is a contributing writer to the New Yorker, where his investigative reporting has won the Pulitzer Prize for public service, the National Magazine Award and the George Polk Award, among other honors. He previously worked as an anchor and investigative reporter at MSNBC and NBC News and is currently producing documentaries for HBO. His print commentary and reporting has appeared in publications including the Wall Street Journal, Los Angeles Times and Washington Post. Before his career in journalism, he served as a State Department official in Afghanistan and Pakistan. He is also the author of the New York Times bestseller War on Peace: The End of Diplomacy and the Decline of American Influence. Farrow has been named one of Time Magazine's 100 Most Influential People and one of GQ's Men of the Year. He is a graduate of Yale Law School and a member of the New York Bar. He recently completed a DPhil in political science at Oxford University, where he studied as a Rhodes Scholar. He lives in New York.
GOR011037849
9780708899281
0708899285
Catch and Kill: Lies, Spies and a Conspiracy to Protect Predators by Ronan Farrow
Ronan Farrow
Used - Like New
Paperback
Little, Brown Book Group
2020-06-30
480
Short-listed for LA Times Book Prize 2020 (UK)
Book picture is for illustrative purposes only, actual binding, cover or edition may vary.
The book has been read, but looks new. The book cover has no visible wear, and the dust jacket is included if applicable. No missing or damaged pages, no tears, possible very minimal creasing, no underlining or highlighting of text, and no writing in the margins
Trustpilot