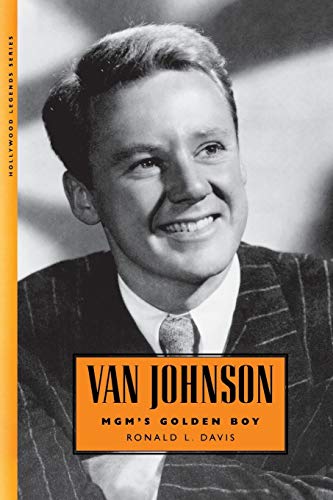 Van Johnson's dazzling smile, shock of red hair, and suntanned freckled cheeks made him a movie-star icon. Among teenaged girls in the 1940s, he was popularized as the bobbysoxer's heartthrob. This solid, thoroughly researched biography traces the career and influence of a favourite star and narrates a fascinating, sometimes troubled life story.

Van Johnson's dazzling smile, shock of red hair, and suntanned freckled cheeks made him a movie-star icon. Among teenaged girls in the 1940s, he was popularized as the bobbysoxer's heartthrob.

He won the nation's heart, too, by appearing in a series of blockbuster war films - A Guy Named Joe, Thirty Seconds Over Tokyo, Weekend at the Waldorf, and Battleground. Perennially a leading man opposite June Allyson, Esther Williams, Judy Garland, and Janet Leigh, he rose to fame radiating the sunshine image Metro-Goldwyn-Mayer chose for him, that of an affable, wholesome boy-next-door. Legions of adoring moviegoers were captivated by this idealized persona that generated huge box-office profits for the studio.

However, Johnson's off-screen life was not so sunny. His mother had rejected him in childhood, and he lived his adult life dealing with sexual ambivalence. A marriage was arranged with the ex-wife of his best friend, the actor Keenan Wynn. During the waning years of Hollywood's Golden Age, she and Johnson lived amid the glow of Hollywood's A-crowd. Yet their private life was charged with tension and conflict.

Although morose and reclusive by nature, Johnson maintained a happy-go-lucky facade, even among co-workers who knew him as a congenial, dedicated professional. Once free of the golden-boy stereotype, he became a respected actor assigned stellar roles in such acclaimed films as State of the Union, Command Decision, The Last Time I Saw Paris, and The Caine Mutiny.

With the demise of the big studios, Johnson returned to the stage, where he had begun his career as a song-and-dance man. After this, he appeared frequently in television shows, performed in nightclubs, and became the legendary darling of older audiences on the dinner playhouse circuit. Johnson (1916-2008) spent his post-Hollywood years living in solitude in New York City.

This solid, thoroughly researched biography traces the career and influence of a favorite star and narrates a fascinating, sometimes troubled life story.
Ronald L. Davis is the author of Hollywood Beauty: Linda Darnell and the American Dream, John Ford: Hollywood's Old Master, and Duke: The Life and Image of John Wayne. He is professor emeritus of history at Southern Methodist University, USA.
NPB9781496803856
9781496803856
149680385X
Van Johnson: MGM's Golden Boy by Ronald L. Davis
Ronald L. Davis
Hollywood Legends Series
New
Paperback
University Press of Mississippi
2016-03-30
280
N/A
Book picture is for illustrative purposes only, actual binding, cover or edition may vary.
This is a new book - be the first to read this copy. With untouched pages and a perfect binding, your brand new copy is ready to be opened for the first time
Trustpilot