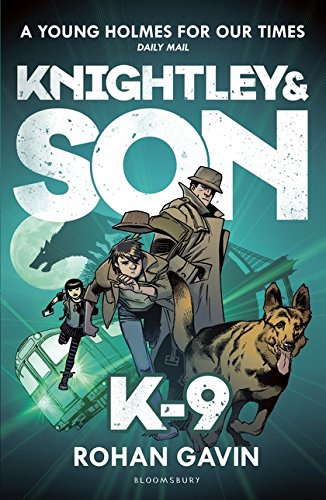 Darkus Knightley - tweed-wearing, mega-brained, thoroughly logical 13-year-old investigator of the weird - was just getting used to having his dad back in his life. Then Alan Knightley went off-radar, again, leaving Darkus with a traumatised ex-bomb-disposal dog as his only partner in crime-solving. Now things are getting even stranger. Family pets are being savaged by a beast at a top London beauty spot. Policemen have been tracked and attacked by a particularly aggressive canine. And two curiously alert hounds seem to be watching Darkus's house. No one is using the word werewolf - yet - but as the full moon approaches, it doesn't take Sherlock Holmes to work out that someone or something sinister is messing with the minds of London's dog population. A mysterious canine conspiracy is howling for the attention of Knightley & Son ... Criminally good detective adventure, perfect for fans of Sherlock and sharp-minded sleuths of all shapes and sizes ... www.knightleyandson.com
Praise for K-9 (Knightley and Son 2): The second in the Knightley and Son series gets a little darker, offering more bite, tragedy and paternal dysfunction, as well as respectable levels of gore. Darkus Knightley is the primary tool his periodically comatose father, Alan, taps to continue investigating the elusive criminal gang, the Combination. At the end of Knightley and Son (2014), their partnership looked promising and, optimistically, so did their fractured familial relationship. As the book opens, however, paterfamilias is working alone again. Darkus, left in the company of an incontinent but loyal former war dog, discovers something afoot. A number of dogs are missing at Hampstead Heath, and enormous, bloodthirsty mutts are appearing during full moons to maul police officers (werewolf theories abound). Pressing his father to work together again, Darkus finds that Knightley's suggestion that they be a detecting duo was more of a pacifier than a promise, and the feeling of abandonment returns. This is readable as a stand-alone, but familiarity with the first instalment will give readers the full scope of Darkus's frustration with a physically and emotionally absent father. Though it suffers some from second-book syndrome, its closer examination of the father-son relationship, the endearing boy-and-his-dog thread, the conversely violent thrill of the occult, and one of the creepiest, multifaceted villains this side of Moriarty will ensnare readers. A teeth-gnashing thriller more macabre than its predecessor, it will have readers (ahem) howling for a third. -- Kirkus Reviews * Kirkus Reviews *
Praise for K-9 (Knightley and Son 2): Young fans of Sherlock Holmes will be happy to see this - The Bookbag -- The Bookbag * The Bookbag *
Praise for K-9 (Knightley and Son 2): The perfect case for father-and-son detective team, Knightley & Son - Sunday Express, Best Children's Novels Summer 2014 -- Sunday Express * Sunday Express *
Praise for Knightley and Son: A rousing page-turner with one fault: it ends - Kirkus Reviews Best Children's Books of 2014 -- Kirkus * Kirkus *
Praise for Knightley and Son: Aimed at young adventurers, Rohan Gavin's Knightley & Son, for age 10+, perfectly combines comedy and crime-solving as young Doc Knightley tries to discover what caused his father, a private investigator, to fall into a coma. This is an engaging debut and the tweed-loving Doc is a young Holmes for our times - Daily Mail * Daily Mail *
Praise for Knightley and Son: Heaps of mystery, dry humour and tweed abound in this exemplar of crime fiction a la Doyle ... A rousing page-turner with one fault: it ends - Kirkus Reviews, starred review * Kirkus *
Praise for Knightley and Son: Dangers are faced in London in an engaging, characterful debut ... with enjoyably convincing family relationships - Nicolette Jones, Sunday Times * Sunday Times *
Praise for Knightley and Son: Full of suspense, intrigue and humour, this is a modern day classic detective mystery - Guardian Best New Children's Books, Summer 2014 * The Guardian *
Rohan Gavin attended Exeter College, Oxford and the American Film Institute in Los Angeles, where he worked as a screenwriter. After developing a passion for hard-boiled detective fiction and outlandish conspiracy theories, he returned to London to write the Knightley & Son series. His ambition is to start a father-son detective agency, if his son will allow it.
GOR007257893
9781408867631
140886763X
K-9 by Rohan Gavin
Rohan Gavin
Knightley and Son
Used - Very Good
Paperback
Bloomsbury Publishing PLC
2015-11-05
320
N/A
Book picture is for illustrative purposes only, actual binding, cover or edition may vary.
This is a used book - there is no escaping the fact it has been read by someone else and it will show signs of wear and previous use. Overall we expect it to be in very good condition, but if you are not entirely satisfied please get in touch with us
Trustpilot