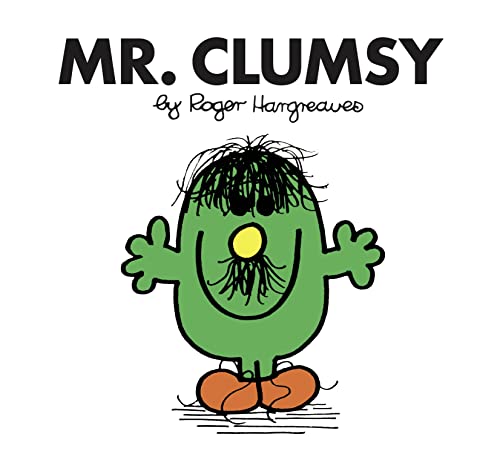 Mr Clumsy, as you might have guessed, was a rather clumsy fellow. Find out what happens when he calls in at the farm to buy some eggs.

Mr Clumsy, as you might have guessed, was a rather clumsy fellow. Find out what happens when he calls in at the farm to buy some eggs.

The colourful characters have been delighting children since Mr Tickle first appeared on bookshelves in 1971.', The Independent

'The Mr Men and Little Miss characters remain a cultural phenomenon, whose impact is felt far beyond the nursery bookshelf.', The Telegraph

It all started with a tickle. Roger Hargreaves' son Adam asked him what a tickle looked like. In response, Roger drew a small orange man with extraordinarily long arms that could reach anywhere and tickle anyone. The idea that a tickle could be a character in its own right sparked an idea in Roger's mind. Roger was a successful copywriter but he wanted to do something that would enable him to work from home and spend more time with his four children. He wondered if he could make a living writing and illustrating children's books so he wrote the first Mr Men titles: Mr Tickle, Mr Greedy, Mr Happy, Mr Nosey, Mr Sneeze and Mr Bump.

The books were an instant hit and Roger went on to create many more Mr Men and Little Miss characters. What Roger really wanted was to make children laugh. Mr Silly was his favourite Mr Men story and, according to his family, encapsulates his humour most closely. Sadly Roger passed away in 1988, but his son Adam took over the series, introducing new characters and exciting new adventures. Roger once said, 'I feel very happy to think that when the Mr Men and Little Misses are 100 years old, their readers will always be five.'