Murder by the Sea Robin Jarossi 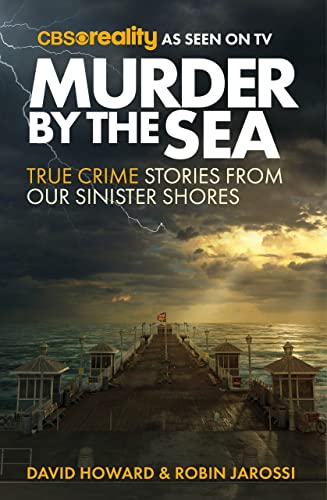 Murder by the Sea by Robin Jarossi

A beach read like no other! Be prepared for a journey from where the land meets the sea, to where life meets death.

Murder by the Sea: True Crime Stories from our Sinister Shores by Robin Jarossi

There is something sinister about a British seaside town. On the surface they're all funfairs and breezy promenades. Yet dig a little deeper in the sand and you soon uncover an underworld of murder, madness and mayhem...

Murder by the Sea Vol 1 is a companion book to the long-running true-crime documentary series on CBS Reality. Since 2018 the programme has examined some of the most extraordinary murder cases in Britain's seaside towns. From Blackpool to Bournemouth, Southport to Pembrokeshire, people love to be beside the seaside, but away from the piers, the arcades and beautiful beaches lurks some dark secrets.

Ten of the series' most powerful and shocking cases feature in Murder by the Sea Vol 1. From serial killers to a 1950s poisoner, from cruel husbands to an unusual murder by a mother and son, these are the true stories of wives, couples and families who had the misfortune to encounter a killer in their everyday lives.

With complete access to the extensive interviews conducted by the TV production teams with detectives, forensic psychologists, witnesses and relatives, Murder by the Sea Vol 1 features exclusive additional material and insights that could not be included in the original episodes.

David Howard is a documentary film maker and founder of the television production company Monster Films. A recipient of the Royal Television Society Award for journalism, his award-winning films include Interview With A Murderer (Channel 4) and Dark Son (BBC). He is the creator and director of the series Murder by the Sea. This is his first book.

Robin Jarossi is a freelance journalist and the author of The Hunt for the 60s' Ripper. He is also an on-air contributor to true-crime documentaries on the BBC and CBS Reality, including Murder by the Sea.

GOR012452504
9781914451645
1914451643
Murder by the Sea: True Crime Stories from our Sinister Shores by Robin Jarossi
Robin Jarossi
Used - Very Good
Paperback
Ad Lib Publishers Ltd
2022-07-07
304
N/A
Book picture is for illustrative purposes only, actual binding, cover or edition may vary.
This is a used book - there is no escaping the fact it has been read by someone else and it will show signs of wear and previous use. Overall we expect it to be in very good condition, but if you are not entirely satisfied please get in touch with us
Trustpilot