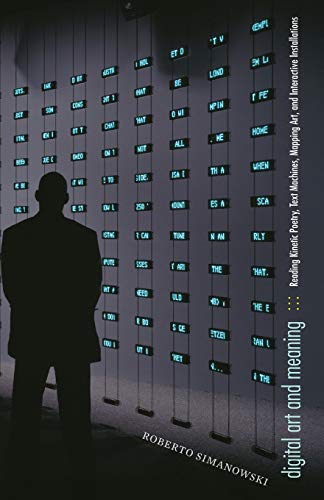 How to interpret and critique digital arts, in theory and in practice.

In a world increasingly dominated by the digital, the critical response to digital art generally ranges from hype to counterhype. Popular writing about specific artworks seldom goes beyond promoting a given piece and explaining how it operates, while scholars and critics remain unsure about how to interpret and evaluate them. This is where Roberto Simanowski intervenes, demonstrating how such critical work can be done.
Digital Art and Meaning offers close readings of varied examples from genres of digital art such as kinetic concrete poetry, computer-generated text, interactive installation, mapping art, and information sculpture. For instance, Simanowski deciphers the complex meaning of words that not only form an image on a screen but also react to the viewer's behavior; images that are progressively destroyed by the human gaze; text machines generating nonsense sentences out of a Kafka story; and a light show above Mexico City's historic square, created by Internet users all over the world. Simanowski combines these illuminating explanations with a theoretical discussion that employs art philosophy and history to achieve a deeper understanding of each particular example of digital art and, ultimately, of the genre as a whole.

"Against an aesthetic thought that privileges erotics over hermeneutics and performative presence over meaning, Roberto Simanowski demonstrates in critical detail how the web has not spelt the end of interpretation, but has complicated it. Mobilizing the history and theory of the avant-garde from Apollinaire and Dada to situationsim and aleatoric poetry, he analyzes salient examples of digital art and literature, engaging with the ways in which code and programming, hypertext, collaborative writing, and interactive installations challenge notions of authorship and audience, reading and writing. A major work on the aesthetics of the digital media by a superb close reader who cuts across literary and media studies and opens up new dimensions for the humanities. A must read for programmers and humanists, engineers and artists alike." -Andreas Huyssen, Columbia University

"In a tightly interlocked set of readings of representative works ranging from concrete poetry to interactive installations, Roberto Simanowski makes a compelling case for a re-fashioned semiotic analysis that attends to the meaning produced by the formal intricacies of the work itself as well as by external processes of production and reception. In Simanowski, digital art finds the thoughtful, incisive, and erudite reader it truly deserves." -Rita Raley, University of California, Santa Barbara

Roberto Simanowski is professor of media studies at the University of Basel.
Preface: Against the Embrace
Introduction: Close Reading
1. Digital Literature
2. Kinetic Concrete Poetry
3. Text Machines
4. Interactive Installations
5. Mapping Art
6. Real-Time Web Sculpture
Epilogue: Code, Interpretation, Avant-Garde
Notes
Bibliography
Index
GOR011441556
9780816667383
0816667381
Digital Art and Meaning: Reading Kinetic Poetry, Text Machines, Mapping Art, and Interactive Installations by Roberto Simanowski
Roberto Simanowski
Electronic Mediations
Used - Very Good
Paperback
University of Minnesota Press
2011-05-20
328
N/A
Book picture is for illustrative purposes only, actual binding, cover or edition may vary.
This is a used book - there is no escaping the fact it has been read by someone else and it will show signs of wear and previous use. Overall we expect it to be in very good condition, but if you are not entirely satisfied please get in touch with us
Trustpilot