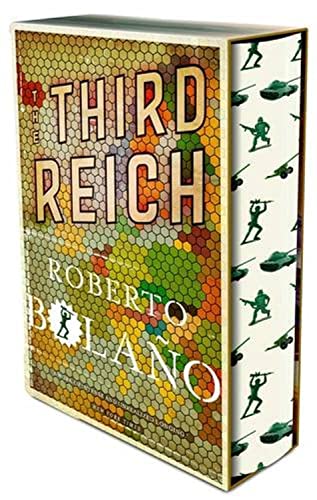 The Third Reich by Roberto Bolano

Discovered after his death, in 2003, Bolano left this novel complete as a typewritten manuscript - meticulously corrected by hand - it is published in English translation for the first time

The Third Reich by Roberto Bolano

Udo Berger, aspiring writer and wargames champion of Stuttgart, decides it is time to take his new love, Ingeborg, on holiday to the Costa Brava. He brings along his new game, The Third Reich, which he plans to practice for the upcoming wargames tournament in Paris, where he will finally meet the sleek American champion, Rex Douglas.

However, things take a sinister turn when some shady locals arrive on the scene and one of Udo's friends disappears. Pursued by a shadowy detective who visits his nightmares in quest for the truth; the surrealistic landscape of the Costa Brava and his increasingly feverish dreams draw him further into delirium. Finally, he finds himself locked in mortal combat when he engages in a game of Third Reich with the enigmatic and disfigured El Quemado - a foreginer who lives in a Kafkaesque burrow on the beach.

Unpublished in any language during Bolano's lifetime, this story of one man's journey into nightmare will make a welcome addition to this author's already astonishing oevre.

Roberto Bolano was born in Santiago, Chile, in 1953. He grew up in Chile and Mexico City. His first full-length novel, The Savage Detectives, won the Herralde Prize and the Romulo Gallegos Prize, and Natasha Wimmer's translation of The Savage Detectives was chosen as one of the ten best books of 2007 by the Washington Post and the New York Times. Bolano died in Blanes, Spain, at the age of fifty. Described by the New York Times as "the most significant Latin American literary voice of his generation", in 2008 he was posthumously awarded the National Book Critics Circle Award for Fiction for his novel 2666. Natasha Wimmer is an American translator who is best known for her translations of Roberto Bolano's works from Spanish to English. She grew up in Iowa and also spent a few years as a child in Madrid. Wimmer attended Harvard University and studied Spanish literature. After college she began to work for Farrar, Straus, & Giroux, as an assistant and later as a managing editor, where she happened upon Bolano's Savage Detectives. Bolano's translator was too busy at the time to work on this project and Wimmer was thrilled to take it on herself. Her translation was incredibly well-received. She has since gone on to translate several of Bolano's works as well as the work of Nobel Prize-winner Mario Vargas Llosa. In 2007 she received an NEA Translation Grant, in 2009 she won the PEN Translation Prize, and she has also received an Award in Literature from the American Academy of Arts and Letters. Her translation of Bolano's 2666 also won the National Book Award's Best Novel of the Year. She is a Fellow of the National Endowment for the Arts and teaches translation seminars at Princeton University. She lives in New York City.
GOR005139688
9780330535793
033053579X
The Third Reich by Roberto Bolano
Roberto Bolano
Used - Very Good
Paperback
Pan Macmillan
2012-01-05
288
N/A
Book picture is for illustrative purposes only, actual binding, cover or edition may vary.
This is a used book - there is no escaping the fact it has been read by someone else and it will show signs of wear and previous use. Overall we expect it to be in very good condition, but if you are not entirely satisfied please get in touch with us
Trustpilot