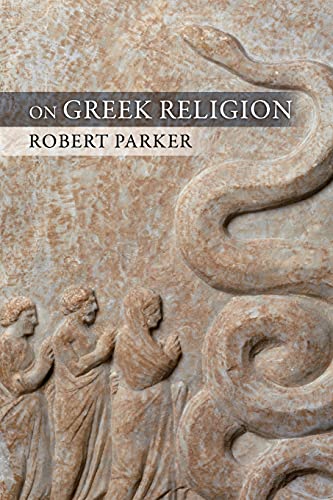 On Greek Religion by Robert Parker

A provocative and wide-ranging entree into the world of ancient Greek religion.

On Greek Religion by Robert Parker

"There is something of a paradox about our access to ancient Greek religion. We know too much, and too little. The materials that bear on it far outreach an individual's capacity to assimilate: so many casual allusions in so many literary texts over more than a millennium, so many direct or indirect references in so many inscriptions from so many places in the Greek world, such an overwhelming abundance of physical remains. But genuinely revealing evidence does not often cluster coherently enough to create a vivid sense of the religious realities of a particular time and place. Amid a vast archipelago of scattered islets of information, only a few are of a size to be habitable."-from the Preface

In On Greek Religion, Robert Parker offers a provocative and wide-ranging entree into the world of ancient Greek religion, focusing especially on the interpretive challenge of studying a religious system that in many ways remains desperately alien from the vantage point of the twenty-first century. One of the world's leading authorities on ancient Greek religion, Parker raises fundamental methodological questions about the study of this vast subject. Given the abundance of evidence we now have about the nature and practice of religion among the ancient Greeks-including literary, historical, and archaeological sources-how can we best exploit that evidence and agree on the central underlying issues? Is it possible to develop a larger, "unified" theoretical framework that allows for coherent discussions among archaeologists, anthropologists, literary scholars, and historians?

In seven thematic chapters, Parker focuses on key themes in Greek religion: the epistemological basis of Greek religion; the relation of ritual to belief; theories of sacrifice; the nature of gods and heroes; the meaning of rituals, festivals, and feasts; and the absence of religious authority. Ranging across the archaic, classical, and Hellenistic periods, he draws on multiple disciplines both within and outside classical studies. He also remains sensitive to varieties of Greek religious experience. Also included are five appendixes in which Parker applies his innovative methodological approach to particular cases, such as the acceptance of new gods and the consultation of oracles. On Greek Religion will stir debate for its bold questioning of disciplinary norms and for offering scholars and students new points of departure for future research.

"On Greek Religion has all the virtues we have come to appreciate in his writings: a fruitful blend of the factual and theoretical; a simultaneous inclination towards and distrust of categories, schemes, and generalities; scrupulous attention to detail; an awareness of what we do and do not and cannot know about Greek religion; precise and generous but not uncritical discussions of others' views; the integration of literary and epigraphical sources; common sense; and a lively style with touches of whimsy."

"This book derives from the Townsend Lectures given by Parker at Cornell in 2008, but its style is not noticeably different from that of Parker's two previous books.... Its scope is wider than those two works, both chronologically, dealing with material from the eighth to the second century BC, and geographically, covering the entire Greek world. Its ambition is also greater, in that its seven chapters and five appendices aim to provide an interpretation of Greek religion as a whole.... This is a very important book that everyone working in the field of Greek religion will have to read."

"This book is an important step in its author's scholarly journey in the field of ancient Greek religion.... This work is outstandingly well-informed, well-written, clever and also very cautious."

"Although one might expect a mere survey from the title, Parker delivers far more than a beginners' summary. Rather, this book is a probing exploration of the methodological and interpretive difficulties associated with Greek religion from the eighth through the second centuries BCE.... This work provides a wealth of insights from one of the leading experts in the field. Summing Up: Highly recommended."

"This work, derived from a series of lectures given by the author at Cornell University in 2008, offers a discussion on a series of central questions in the domain of Greek religion. R. Parker achieves his goal with much maestria in this work, which is proof of an excellent knowledge of Greek religion, both ancient evidence and equal historiography, to which he returns frequently. To enrich his reflections, the author systematically echoes various interpretations of the issues he tackles, thus giving breadth to his analysis. All of these qualities make On Greek Religion an indispensable text for specialists in Ancient Greek religion, who will find in it abundant material for reflection."

Robert Parker is Wykeham Professor of Ancient History at the University of Oxford. He is the author of Polytheism and Society at Athens, Athenian Religion: A History, and Miasma: Pollution and Purification in Early Greek Religion.

1. Why Believe without Revelation? The Evidences of Greek Religion
2. Religion without a Church: Religious Authority in Greece
3. Analyzing Greek Gods
4. The Power and Nature of Heroes
5. Killing, Dining, Communicating
6. The Experience of Festivals
7. The Varieties of Greek Religious ExperienceAppendices
1. Seeking the Advice of the God on Matters of Cult
2. Accepting New Gods
3. Worshipping Mortals, and the Nature of Gods
4. Types of Chthonian Sacrifice?
5. The Early History of Hero CultBibliography
Index

NPB9780801477355
9780801477355
0801477352
On Greek Religion by Robert Parker
Robert Parker
Cornell Studies in Classical Philology
New
Paperback
Cornell University Press
2011-02-10
328
Winner of A 2011 Choice Magazine "Outstanding Academic Title.
Book picture is for illustrative purposes only, actual binding, cover or edition may vary.
This is a new book - be the first to read this copy. With untouched pages and a perfect binding, your brand new copy is ready to be opened for the first time
Trustpilot