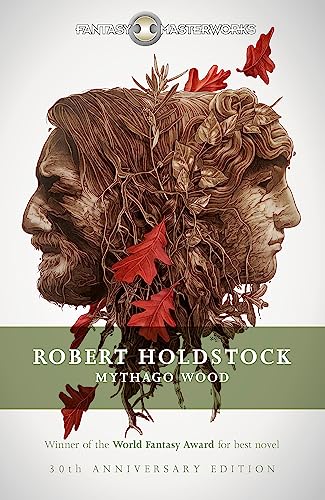 MYTHAGO WOOD won the WORLD FANTASY AWARD FOR BEST NOVEL and is regarded as one of the finest fantasy novels of the 20th century.

Deep within the wildwood lies a place of myth and mystery, from which few return, and of those few, none remain unchanged.

Ryhope Wood may look like a three-mile-square fenced-in wood in rural Herefordshire on the outside, but inside, it is a primeval, intricate labyrinth of trees, impossibly huge, unforgettable ... and stronger than time itself.

Stephen Huxley has already lost his father to the mysteries of Ryhope Wood. On his return from the Second World War, he finds his brother, Christopher, is also in thrall to the mysterious wood, wherein lies a realm where mythic archetypes grow flesh and blood, where love and beauty haunt your dreams, and in promises of freedom lies the sanctuary of insanity ...

Holdstock has a beautifully subtle imagination that conjures up worlds and events with enviable ease ... a writer of both heart and fireBritain's best fantasist - THE TIMESSonorous, vivid, and utterly enthralling - TIMES LITERARY SUPPLEMENTIncredibly enchanting ... a celebration of fantasy - SPECTATOR

Robert Paul Holdstock was born in a remote corner of Kent, sharing his childhood years between the bleak Romney Marsh and the dense woodlands of the Kentish heartlands. He received an MSc in medical zoology and spent several years in the early 1970s in medical research before becoming a full-time writer in 1976. His first published story appeared in the NEW WORLDS magazine in 1968 and for the early part of his career he wrote science fiction. However, it is with fantasy that he is most closely associated.

1984 saw the publication of MYTHAGO WOOD, winner of the BSFA and WORLD FANTASY AWARDS FOR BEST NOVEL, and widely regarded as one of the key texts of modern fantasy. It and the subsequent 'mythago' novels (including LAVONDYSS, which won the BSFA AWARD FOR BEST NOVEL in 1988) cemented his reputation as the definitive portrayer of the wild wood. His interest in Celtic and Nordic mythology was a consistent theme throughout his fantasy and is most prominently reflected in the acclaimed Merlin Codex trilogy, consisting of CELTIKA, THE IRON GRAIN and THE BROKEN KINGS, published between 2001 and 2007.

Among many other works, Holdstock co-wrote TOUR OF THE UNIVERSE with Malcolm Edwards, for which rights were sold for a space shuttle simulation ride at the CN Tower in Toronto, and THE EMERALD FOREST, based on John Boorman's film of the same name. His story, 'The Ragthorn', written with friend and fellow author Garry Kilworth, won the WORLD FANTASY AWARD FOR BEST NOVELLA and the BSFA AWARD FOR SHORT FICTION.

Robert Holdstock died in November 2009, just four months after the publication of AVILION, the long-awaited, and sadly final, return to Ryhope Wood.

GOR006536732
9781473205451
147320545X
Mythago Wood by Robert Holdstock
Robert Holdstock
Fantasy Masterworks
Used - Very Good
Paperback
Orion Publishing Co
2014-11-27
320
Winner of British Science Fiction Association Award for Best Novel 1985 (UK) Winner of World Fantasy Award 1985 (UK)
Book picture is for illustrative purposes only, actual binding, cover or edition may vary.
This is a used book - there is no escaping the fact it has been read by someone else and it will show signs of wear and previous use. Overall we expect it to be in very good condition, but if you are not entirely satisfied please get in touch with us
Trustpilot