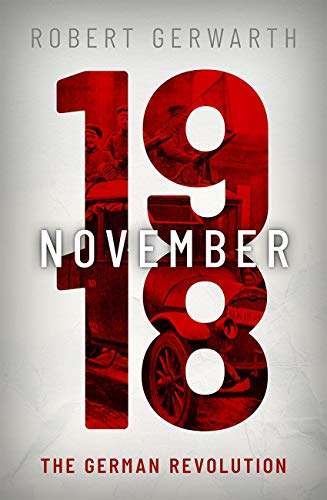 The story of an epochal event in German history, this is also the story of the most important revolution that you might never have heard of.

November 1918: The German Revolution by Robert Gerwarth (Professor of Modern History at UCD and Director of the Centre for War Studies)

The German Revolution of November 1918 is nowadays largely forgotten outside Germany. It is generally regarded as a failure even by those who have heard of it, a missed opportunity which paved the way for the rise of the Nazis and the catastrophe to come. Robert Gerwarth argues here that to view the German Revolution in this way is a serious misjudgement. Not only did it bring down the authoritarian monarchy of the Hohenzollern, it also brought into being the first ever German democracy in an amazingly bloodless way. Focusing on the dramatic events between the last months of the First World War in 1918 and Hitler's Munich Putsch of 1923, Robert Gerwarth illuminates the fundamental and deep-seated ways in which the November Revolution changed Germany. In doing so, he reminds us that, while it is easy with the benefit of hindsight to write off the 1918 Revolution as a 'failure', this failure was not somehow pre-ordained. In 1918, the fate of the German Revolution remained very much an open book.
Gerwarth argues in his polished narrative drawing on the eyewitness testimony of famous writers and thinkers that Weimar was not "the doomed republic" of legend, a hopeless 14-year interval between a warmongering Kaiser and Hitlers Nazi dictatorship, but a success in its own right... 'November 1918' is a perceptive study of an orderly people who proved that a revolution need not lead to extremes of left and right. * Martin Ivens, The Times *
Gerwarth's November 1918 [is one] of the most stimulating histories of the interwar period to have been published in recent years. * Tony Barber, The Financial Times *
Gerwarth's scholarship cannot be faulted... a superlative piece of research into a sequence of events that are of immense importance. * Simon Heffer, The Daily Telegraph *
Authoritative new account... Gerwarth has... done us [a] service by rescuing the Weimar Republic from what EP Thompson, in another context, called 'the enormous condescension of posterity'. * Brendan Simms, The Irish Times *
Splendidly researched, and with a striking new thesis... a fascinating study, whose insights will stop you dead even if you thought, as I did, that you already knew this stuff. * James Hawse, The Spectator *
Thought-provoking and readable ... Gerwarth's invaluable book shows that, compared to their counterparts in other central European states facing similar turmoil, the moderate German revolutionaries had spectacular success in securing their democracy. By 1929, only cataclysmic economic crisis could overturn what was Europes most open and representative liberal state. Hitler, it seems, got lucky. * Alexander Watson, Literary Review *
November 1918 provides a first-rate survey of events and personalities surrounding the revolution in Germany ... Robert Gerwarth has written a detailed account of a fascinating topic. The writing is clear and avoids jargon and theory. The research is thorough, as is made evident by the notes and the comprehensive bibliography. His book has academic credibility but can also be recommended for the general reader. * Jim Burns, Penniless Press *
Meticulously researched, judiciously argued, and written with enviable panache, November 1918 is an engaging history with much original insight that should become the standard work on the subject. * Professor Anthony McElligott, University of Limerick *
Robert Gerwarth is Professor of Modern History at UCD and Director of the Centre for War Studies. He is the author of The Bismarck Myth (Oxford UP, 2005) and a biography of Reinhard Heydrich (Yale UP, 2011). His third monograph, The Vanquished: Why the First World War Failed to End was published by Penguin (UK) and FSG (US) in the autumn of 2016. He has authored several articles in leading international journals such as Past & Present, The Journal of Modern History, Geschichte & Gesellschaft, and Vingtieme Siecle. His work has been translated into some thirty languages.
Preface Introduction:
NGR9780199546473
9780199546473
0199546479
November 1918: The German Revolution by Robert Gerwarth (Professor of Modern History at UCD and Director of the Centre for War Studies)
Robert Gerwarth (Professor of Modern History at UCD and Director of the Centre for War Studies)
Making of the Modern World
New
Hardback
Oxford University Press
2020-07-11
368
N/A
Book picture is for illustrative purposes only, actual binding, cover or edition may vary.
This is a new book - be the first to read this copy. With untouched pages and a perfect binding, your brand new copy is ready to be opened for the first time
Trustpilot