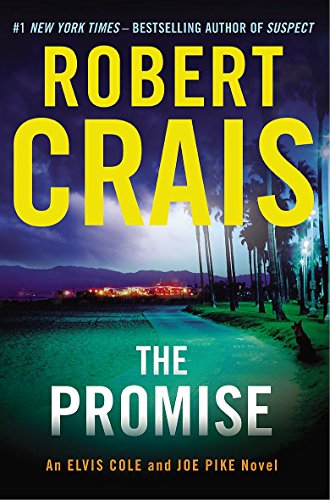 The Promise by Robert Crais

The gripping new novel from the master of the intelligent action thriller and author of SUSPECT, Robert Crais.

The Promise: An Elvis Cole and Joe Pike Novel by Robert Crais

Elvis Cole and Joe Pike are joined by SUSPECT heroes Scott James and his K-9 partner, Maggie, in the new masterpiece of suspense from the No.1 bestselling author.

Loyalty, commitment, the fight against injustice - these are the things that have always driven Elvis Cole and Joe Pike. If they make a promise, they keep it. Even if it could get them killed.

When Elvis Cole is hired to locate a woman who may have disappeared with a stranger she met online, it seems like an ordinary case - until Elvis learns the missing woman worked for a defence contractor and was being blackmailed to supply explosives components for a person or persons unknown.

Meanwhile, in another part of the city, LAPD officer Scott James and his patrol dog, Maggie, enter an abandoned building to locate an armed and dangerous thief, only to discover far more than they expected. The fugitive is dead, the building is filled with explosives, and Scott and Maggie are assaulted by a hidden man who escapes in the chaos, all as a bloodied Joe Pike watches from the shadows.

Soon, Scott and Maggie find themselves targeted by that man and, as their case intertwines with Elvis and Joe's, join forces to follow the trail of the missing woman as well. From inner-city drug traffickers to a shadowy group of Afghan war veterans with ties to a terrorist cell, the people they encounter on that trail add up to ever-increasing odds, and soon the four of them are fighting to find the woman not only before she is killed ... but before the same fate happens to one of them.

'Once again Crais has created a breathless thriller with an undercurrent of powerful emotion - and somehow made it seem easy' * EVENING STANDARD *
Through the sheer plausibility of his plotting and the deft characterisation of even the most minor characters, Crais delivers as satisfying an addition to the Cole/Pike canon as could be desired * IRISH INDEPENDENT *
'A Feat of good storytelling.' * SUNDAY BUSINESS POST *

Robert Crais is the author of the SUNDAY TIMES bestselling Elvis Cole and Joe Pike novels. Crais began a successful career in television in the 1970s, writing scripts for such major series as CAGNEY AND LACEY, MIAMI VICE and HILL STREET BLUES. In addition to the Cole and Pike novels, he has also written several bestselling standalone thrillers. Crais lives in Los Angeles with his wife and family.

Find out more at www.robertcrais.com

GOR007166035
9781409127154
140912715X
The Promise: An Elvis Cole and Joe Pike Novel by Robert Crais
Robert Crais
Cole & Pike
Used - Very Good
Hardback
Orion Publishing Co
2016-01-14
416
N/A
Book picture is for illustrative purposes only, actual binding, cover or edition may vary.
This is a used book - there is no escaping the fact it has been read by someone else and it will show signs of wear and previous use. Overall we expect it to be in very good condition, but if you are not entirely satisfied please get in touch with us
Trustpilot