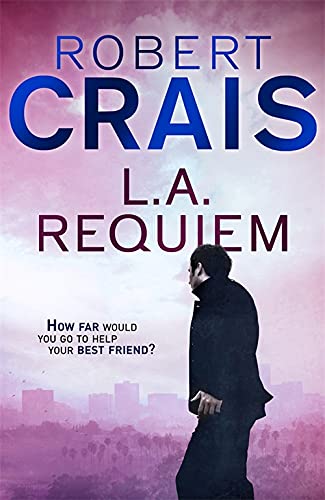 L. A. Requiem by Robert Crais

They killed the only one who ever cared and now they're going to pay.

L. A. Requiem by Robert Crais

They killed the only one who ever cared and now they're going to pay.

A reckoning has come to the City of Angels...

Karen Garcia is missing and her father doesn't trust the cops - he wants someone he knows on the case. So he enlists the help of Elvis Cole and Joe Pike.

It seems that Karen is the latest victim of a distinctive serial killer and the police are determined to pin her death, and four others, on the witness who found her body. Cole doesn't believe the man has the guts to murder, and with his partner and the police at each other's throats, it's down to him to find the connection that will reveal the killer. But nailing the murderer means choosing between the two people he cares most about...

Robert Crais is, without question, one of the very best mystery writers of all time. And in Elvis Cole and Joe Pike he has created two of the most iconic figures in any genre -- David Baldacci
Robert Crais is one of best storytellers at work today. He never disappoints, never leaves you anywhere but the edge of your seat -- Michael Connelly
In the ambitious new L. A. REQUIEM, Robert Crais has created a series entry that threatens to break through the genre barrier. (He has) crafted a full-bodied novel that explores such topics as honor and friendship and justice and love, that brings its protagonists to a new point of self-awareness and, not incidentally, that provides the kind of puzzle plot that sends mystery fans into paroxysms of joy * LA TIMES *
This is Crais's most ambitious novel to date, a big book that juggles aspects of friendship, trust and love against a background of violence and conspiracy. Highly recommended * IRISH TIMES *
L. A. REQUIEM is an utterly gripping narrative, written straight from the heart. The almost unbearable tension is tempered by the wit and humanity of Cole himself, confirming Robert Crais's place as a major American thriller writer * MANCHESTER EVENING NEWS *
Crais creates plots as lucid as blueprints and strong enough to build cities on. Ear-pinning dialogue and proper attention paid to characterization and relationships. No sunny romances on the agenda, but real feelings--love, friendship, and loathing--explored, and even celebrated. So good you'll want to shout about it * LITERARY REVIEW *
L. A. REQUIEM has been one of the best books I've read this year, and this has been an exceptionally good year. This novel has everything: great setting, terrific characters, a plot that hooks you from the first page, and expert knowledge of police procedure. Simply irresistible * TORONTO GLOBE & MAIL *
With a pace that never falters, Elvis and Joe burrow through layers of deceit following the death of an ex-girlfriend, with the LAPD itself under suspicion in this tale of double-crossing that is also unbearably poignant. A major US crime series that can no longer be overlooked * TIME OUT *

Robert Crais is the author of the bestselling Cole & Pike novels. A native of Louisiana, Crais moved to Hollywood in the late 70s where he began a successful career in television, writing scripts for such major series as CAGNEY & LACEY, MIAMI VICE and HILL STREET BLUES. In the mid 80s, following his success with the TV buddy genre, Crais created a series of crime novels based around the characters Cole & Pike. In addition, Crais has also written several bestselling standalone thrillers. In 2014 he became a Grand Master of the Mystery Writers of America. Robert Crais lives in Los Angeles with his wife and family.
Find out more at www.robertcrais.com.

GOR003242932
9781409135609
1409135608
L. A. Requiem by Robert Crais
Robert Crais
Cole & Pike
Used - Very Good
Paperback
Orion Publishing Co
2011-03-03
464
N/A
Book picture is for illustrative purposes only, actual binding, cover or edition may vary.
This is a used book - there is no escaping the fact it has been read by someone else and it will show signs of wear and previous use. Overall we expect it to be in very good condition, but if you are not entirely satisfied please get in touch with us
Trustpilot