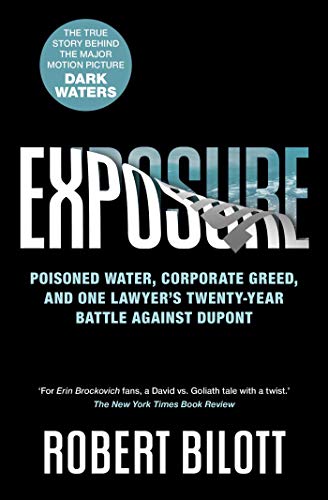 The remarkable David-against-Goliath story of the lawyer who took on industrial conglomerate DuPont in a huge class action - and won. Soon to be a major motion picture.

ERIN BROCKOVICH meets SILENT SPRING in this astounding true story of a lawyer who spent two decades building a case against one of the world's largest chemical companies, uncovering a shocking history of environmental pollution and heartless cover-up.
The story that inspired the motion picture from Participant Media/Focus Features, starring Mark Ruffalo, Anne Hathaway, Bill Pullman and Tim Robbins, directed by Todd Haynes.

In 1998, Robert Bilott was a 33-year-old Cincinnati lawyer on the verge of making partner when his career and life took an unforeseen turn. He was taken by surprise when he received a call from a man named Earl Tennant, a farmer from West Virginia with a slight connection to Robert's family. Earl was convinced the creek on his property, where his cattle grazed, was being poisoned by run-off from a neighbouring factory landfill. His cattle were dying in hideous ways, and he hadn't even been able to get a water sample tested by local agencies, politicians or vets. As soon as they heard the name DuPont - the area's largest employer - he felt they were reluctant to investigate further.

Once Robert saw the thick, foamy water that bubbled into the creek, the gruesome effects it seemed to have on livestock, and the disturbing frequency of cancer and lung problems in the surrounding area, he was persuaded to fight against the type of corporation his firm routinely represented. With all the cards stacked against him, Rob happened upon a stray reference in a random memo to a chemical called PFOA - a substance he'd never heard of that is used in the manufacture of Teflon. From that one reference, he ultimately gained access to 110,000 pages of DuPont documents, some of them fifty years old, that reveal decades of medical studies proving the harmful - more often than not fatal - effects of PFOA in animals and humans. And yet PFOA sludge had still been dumped into rivers and landfill, endangering many lives. The case of one farmer soon spawns a class-action suit and the shocking realisation that virtually every person on the planet has been exposed to PFOA and carries the chemical in his or her blood.

This is the unforgettable story of the lawyer who worked tirelessly for twenty years to get justice for all those who had suffered because of this chemical.
Robert Bilott is a partner at the prestigious law firm Taft Stettinius & Hollister in Cincinnati, Ohio, where he has practised environmental law relating to corporate regulatory compliance for more than twenty-eight years. He has been selected as one of the Best Lawyers in America for several years running and has received numerous honours for his work in environmental law and litigation.
GOR010986690
9781471189647
1471189643
Exposure by Robert Bilott
Robert Bilott
Used - Very Good
Paperback
Simon & Schuster Ltd
2020-07-14
400
N/A
Book picture is for illustrative purposes only, actual binding, cover or edition may vary.
This is a used book - there is no escaping the fact it has been read by someone else and it will show signs of wear and previous use. Overall we expect it to be in very good condition, but if you are not entirely satisfied please get in touch with us
Trustpilot