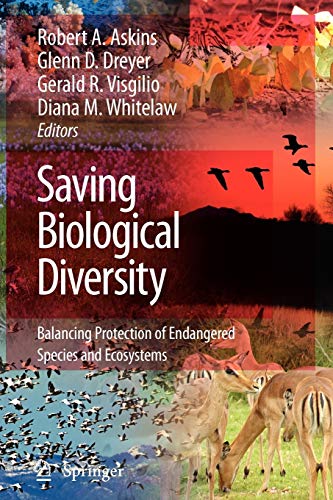 The Goodwin-Niering Center for Conservation Biology and Environmental Studies at Connecticut College is a comprehensive, interdisciplinary program that builds on one of the nation's leading undergraduate environmental studies programs.

The Goodwin-Niering Center for Conservation Biology and Environmental Studies at Connecticut College is a comprehensive, interdisciplinary program that builds on one of the nation's leading undergraduate environmental studies programs. The C- ter fosters research, education, and curriculum development aimed at understanding contemporary ecological challenges. One of the major goals of the Goodwin-Niering Center is to enhance the understanding of both the College community and the general public with respect to ecological, political, social, and economic factors that affect natural resource use and preservation of natural ecosystems. To this end, the C- ter has offered six conferences at which academicians, representatives of federal and state government, people who depend on natural resources for their living, and in- viduals from non-government environmental organizations were brought together for an in-depth, interdisciplinary evaluation of important environmental issues. On April 6 and 7, 2007, the Center presented the Elizabeth Babbott Conant interdisciplinary conference on Saving Biological Diversity: Weighing the Protection of Endangered Species vs. Entire Ecosystems. The Beaver Brook Foundation; Audubon Connecticut, the state of?ce of the National Audubon Society; the Connecticut Chapter of The Nature Conservancy; Connecticut Forest and Park Association and the Connecticut Sea Grant College Program joined the Center as conference sponsors. During this two-day conference we learned about conservation and endangered species fromawiderange ofperspectives. Likeallof theconferences sponsored bythe Goodwin-Niering Center, this conference was broadly interdisciplinary, with pres- tations by economists, political scientists, and conservation biologists.

Robert Askins is Professor of Biology at Connecticut College, where he teaches courses in ecology, environmental studies, animal behavior, and ornithology. His research focuses on the ecology and conservation of migratory birds in both their northern breeding areas and tropical wintering areas. He has analyzed the habitat requirements of forest birds that nest in deciduous forests in New England and Japan, and the ecology of songbirds that spend the winter in the U.S. Virgin Islands. He also has studied species that are restricted to early successional forest habitats. He has published scientific papers in numerous journals including Science, Proceedings of the National Academy of Sciences, Wetlands, Ecology, Current Ornithology, Studies in Avian Biology, Wilson Bulletin, and Conservation Biology. In 2000 he published "Restoring North America's Birds; Lessons from Landscape Ecology," a book on the ecology and conservation of North American birds. Currently he is chair of the Biology Department at Connecticut College and Karla Heurich Harrison Director of the Goodwin-Niering Center for Conservation Biology and Environmental Studies.

Glenn D. Dreyer is the Charles & Sarah P. Becker '27 Director of the Connecticut College Arboretum and an Adjunct Associate Professor of Botany at Connecticut College. His career has focused primarily on the interface between horticulture and ecology from both academic and management perspectives. The Connecticut College Arboretum has historically operated as both public garden featuring native plants and as an ecological field site for research and teaching. Dreyer's research has focused mainly on the ecology and control of invasives, vegetation management, and documenting big and historic trees. He also serves as Executive Director of the Goodwin-Niering Center.

Gerald R. Visgilio is Professor of Economics at Connecticut College, where he has spent nearly three decades working in the area of environmental and natural resource economics. He teaches courses in microeconomics, environmental and natural resource economics, law and economics, and antitrust economics and policy. His current research focuses on an economic evaluation of emission control policies. He has co-edited three books: Our Backyard A Quest for Environmental Justice, which was listed by Choice among its Outstanding Academic Titles in 2003, America's Changing Coasts Private Rights and Public Trust, which was included in Edward Elgar's Advances in Ecological Economics series in 2005, and Acid in the Environment Lessons Learned and Future Prospects, which was recently published in 2007. He also is on the faculty of the Goodwin-Niering Center.

Diana M. Whitelaw is Associate Director of the Goodwin-Niering Center for Conservation Biology and Environmental Studies at Connecticut College where she coordinates the Certificate Program in Environmental Studies. Whitelaw co-edited Our Backyard: A Quest for Environmental Justice, which was selected by Choice as an Outstanding Academic Title in Science and Technology in 2003, America's Changing Coasts: Private Rights and Public Trust in 2005 and Acid in the Environment: Lessons Learned and Future Prospects in 2007.

Saving Biological Diversity: An Overview.-What Are We Trying to Save? And Why? Toward a Policy-Relevant Definition of Biodiversity.-Part I Protecting Populations of Particular Species.-Navigating for Noah, Setting New Directions for Endangered Species Protection in the 21st Century.-Economics of Protecting Endangered Species.-Center for Plant Conservation: Twenty Years of Recovering America's Vanishing Flora.-The Piping Plover as an Umbrella Species for the Barrier Beach Ecosystem.-Restoring Atlantic Salmon (Salmo salar) to New England.-Part II Saving an Ecosystem Through Endangered Species Recovery: Conservation of the Ivory-billed Woodpecker.-Sea Change: Changing Management to Protect Ocean Ecosystems.-Valuation of Natural Resource Improvements in the Adirondacks.-Minimum Dynamic Areas for Matrix Forest Ecosystems.-Restoring America's Everglades: A National Imperative.-Part III The Need for Global Efforts to Save Biological Diversity.-Implications of Local Conservation and Land Protection for the Global Environment.-Creative Approaches to Preserving Biodiversity in Brazil and the Amazon.-International Treaties and Laws on Biodiversity Protection.-Advancing Conservation in a Globalized Worls.-New Perspectives.
NLS9781441934956
9781441934956
1441934952
Saving Biological Diversity: Balancing Protection of Endangered Species and Ecosystems by Robert A. Askins
Robert A. Askins
New
Paperback
Springer-Verlag New York Inc.
2010-10-29
228
N/A
Book picture is for illustrative purposes only, actual binding, cover or edition may vary.
This is a new book - be the first to read this copy. With untouched pages and a perfect binding, your brand new copy is ready to be opened for the first time
Trustpilot