To Hell in a Handcart Richard Littlejohn 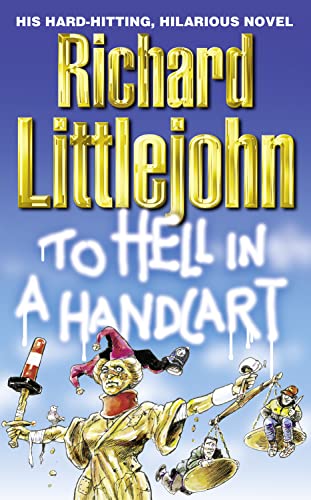 To Hell in a Handcart by Richard Littlejohn

Richard Littlejohn exposes the madness of modern Britain in this thrill-packed rollercoaster ride of a novel, bursting with all the humour and irreverence that have made him Britain's No 1 newspaper columnist.

To Hell in a Handcart by Richard Littlejohn

Richard Littlejohn exposes the madness of modern Britain in this thrill-packed rollercoaster ride of a novel, bursting with all the humour and irreverence that have made him Britain's No 1 newspaper columnist.

What right do you have to protect your family and property from violent criminals? Richard Littlejohn has explored this and other burning social issues in his work as a journalist. Now he takes it even further in a fast-paced powerhouse of a novel, part polemic, part comedy, part tragedy.

Mickey French is just an ordinary bloke, an ex-cop struggling to look after his family as self-righteous do-gooders and bungling bureaucrats bring the country to its knees. But Mickey's life is turned upside down when he is attacked in his own home and forced to defend himself. His arrest for murder is front-page news, and soon the whole nation is watching as he battles for justice, lost in a maze of dodgy lawyers, politically correct police officers, bogus asylum-seekers, self-publicising politicians, shameless journalists and rabble-rousing shock-jocks.

`I admire Littlejohn, love his writing and am amazed that 1990s Britain has only produced one such satirist.'
Matthew Parris, The Times

`The only serious competitor P.J. O'Rourke has.' Independent

Richard Littlejohn is an award-winning journalist and broadcaster, outspoken, controversial and funny. He has a twice-weekly column in the Sun and has written for the Daily Mail, Evening Standard, Punch and the Spectator. He has presented TV shows for LWT, Carlton, Channel 4 and Sky and radio programmes for LBC and the BBC, for whom he currently hosts the top-rated football phone-in 6-0-6.

GOR008139242
9780008209094
000820909X
To Hell in a Handcart by Richard Littlejohn
Richard Littlejohn
Used - Very Good
Paperback
HarperCollins Publishers
2016-08-25
432
N/A
Book picture is for illustrative purposes only, actual binding, cover or edition may vary.
This is a used book - there is no escaping the fact it has been read by someone else and it will show signs of wear and previous use. Overall we expect it to be in very good condition, but if you are not entirely satisfied please get in touch with us
Trustpilot