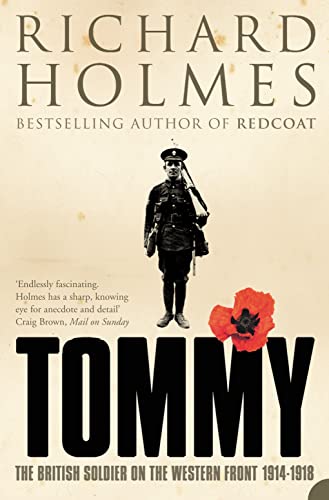 The first history of World War I to place centre-stage the British soldier who fought in the trenches, this superb and important book tells the story of an epic and terrible war through the letters, diaries and memories of those who fought it.

Tommy: The British Soldier on the Western Front by Richard Holmes

The first history of World War I to place centre-stage the British soldier who fought in the trenches, this superb and important book tells the story of an epic and terrible war through the letters, diaries and memories of those who fought it.

Of the six million men who served in the British army, nearly one million lost their lives and over two million were wounded. This is the story of these men - epitomised by the character of Sgt Tommy Atkins - and the women they left behind.

Using previously unseen letters, diaries, memoirs and poetry from the years 1914-1918, Richard Holmes paints a moving picture of the generation that fought and died in the mud of Flanders. He follows men whose mental health was forever destroyed by shell shock, women who lost husbands and brothers in the same afternoon and those who wrote at lunchtime and died before tea.

Groundbreaking and critically-acclaimed, this book tells the real story of trench warfare, the strength and fallibility of the human spirit, the individuals behind an epic event, and their legacy. It is an emotional and unforgettable masterpiece from one of our most important historians.

`Holmes is one of our foremost military scholars and a skilled writer who knows his audience well. This is excellent popular history: scholarly, highly readable and utterly absorbing.' Daily Telegraph

`Monumental ... Every page of this is worth reading.' Time Out

`Where Holmes's book comes brilliantly to life is in his use of first-hand accounts of the trench experience ... It is Holmes's achievement to make this familiar landscape come alive with the humanity of those who fought in it.' TLS

`Holmes has produced yet another fascinating, balanced and original book of a highly emotive subject. ` Sunday Telegraph

GOR001227018
9780007137527
0007137524
Tommy: The British Soldier on the Western Front by Richard Holmes
Richard Holmes
Used - Very Good
Paperback
HarperCollins Publishers
2005-03-07
752
N/A
Book picture is for illustrative purposes only, actual binding, cover or edition may vary.
This is a used book - there is no escaping the fact it has been read by someone else and it will show signs of wear and previous use. Overall we expect it to be in very good condition, but if you are not entirely satisfied please get in touch with us
Trustpilot