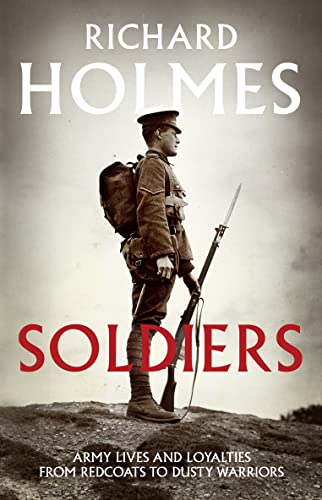 A magisterial new history of the British soldier - a man famously described by the Duke of Wellington as `the scum of the earth'. From battlefield to barrack-room, this book is stuffed to the brim with anecdotes and stories of soldiers from the army of Charles II, through Empire and two World Wars to modern times.

Soldiers: Army Lives and Loyalties from Redcoats to Dusty Warriors by Richard Holmes

A magisterial new history of the British soldier - a man famously described by the Duke of Wellington as `the scum of the earth'. From battlefield to barrack-room, this book is stuffed to the brim with anecdotes and stories of soldiers from the army of Charles II, through Empire and two World Wars to modern times.

The British soldier forms a core component of British history. In this scholarly but gossipy book, Richard Holmes presents a rich social history of the man (and now more frequently woman) who have been at the heart of his writing for decades.

Technological, political and social changes have all made their mark on the development of warfare, but have the attitudes of the soldier shifted as much we might think?

For Holmes, the soldier is part of a unique tribe - and the qualities of loyalty and heroism have continued to grow amongst these men. And while today the army constitutes the smallest proportion of the population since the first decade of its existence (regular soldiers make up just 0.087%), the social organisation of the men has hardly changed; the major combat arms, infantry, cavalry and artillery, have retained much of the forms that men who fought at Blenheim, Waterloo and the Somme would readily grasp.

Regiments remain an enduring feature of the army and Lieutenant Colonels have lost nothing of their importance in military hierarchy; the death of Lieutenant Colonel Rupert Thorneloe in Afghanistan in 2009 shows just how high the risks are that these men continue to face.

Filled to the brim with stories from all over the world and spanning across history, this magisterial book conveys how soldiers from as far back as the seventeenth century and soldiers today are united by their common experiences.

Richard Holmes died suddenly, soon after completing this book. It is his last word on the British soldier - about which he knew and wrote so much.

`If any of his many works of military history should stand as a memorial to his work and achievement, this last most lively book might well be the most fitting'
The Times

`A book of majestic, heart-rending humanity: a deeply affectionate portrait of British soldiers as they have existed for more than 350 years'
Daily Telegraph

`Richard Holmes's considerable talent as a military historian was to get inside the minds of soldiers . . . his empathy with the ordinary soldier is expressed brilliantly in his final book . . . SOLDIERS is a perfect book to mark the end of Holmes's distinguished career . . . a pleasure and an education to read'
Financial Times

`Full of integrity and common sense . . . the humour and the occasional admission of emotion in SOLDIERS make it abundantly clear that it was the British army that commanded [Holmes's] true affection'
The Guardian

`Almost every page is adorned with a fascinating fact or amusing vignette . . . illuminating just how much, and how little, the Army has changed over the centuries. Holmes was a first-rate military historian and his passion for his subject shines through. "That article" [the British Tommy] could not hope for a finer champion.'
Mail on Sunday

`Stirring and magnificent . . . covers every aspect of army life you can think of, and many you wouldn't have'
Sunday Times

`His lasting achievement as a military historian, as is evident in his final book, was to show that there was more to understanding soldiering than a knowledge of battles . . . This is a portrait of them in the round, a social history of their habits and totems and misbehaviour . . . a fitting monument to a renaissance man'
Sunday Telegraph

`Masterful . . . what this book does is bring from the shadows the man behind the uniform, both past and present . . . In this compassionate and masterful book, his work is done.'
Evening Standard

`It is a triumph ... Holmes's passion for soldiers and soldiering shines from every page' Daily Telegraph

GOR003355795
9780007225699
0007225695
Soldiers: Army Lives and Loyalties from Redcoats to Dusty Warriors by Richard Holmes
Richard Holmes
Used - Very Good
Hardback
HarperCollins Publishers
2011-09-01
688
N/A
Book picture is for illustrative purposes only, actual binding, cover or edition may vary.
This is a used book - there is no escaping the fact it has been read by someone else and it will show signs of wear and previous use. Overall we expect it to be in very good condition, but if you are not entirely satisfied please get in touch with us
Trustpilot