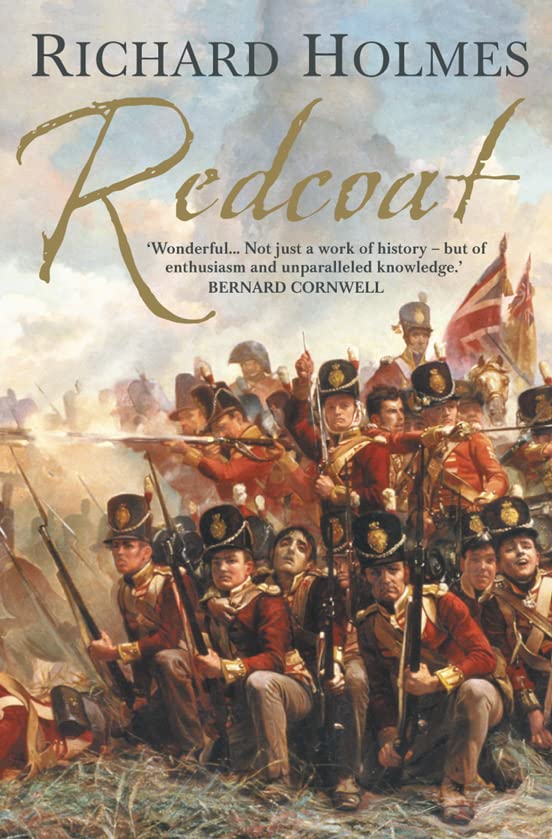 Magnificent history of the common British soldier from 1700 to 1900 by one of Britain's best-known and accomplished military writers and broadcasters. Red Coat is non-fiction Sharpe, filled with anecdote and humour as well as historical analysis.

Redcoat: The British Soldier in the Age of Horse and Musket by Richard Holmes

Magnificent history of the common British soldier from 1700 to 1900 by one of Britain's best-known and accomplished military writers and broadcasters. Red Coat is non-fiction Sharpe, filled with anecdote and humour as well as historical analysis.

`Redcoat is a wonderful book. It is not just a work of history - but one of enthusiasm and unparalleled knowledge.' BERNARD CORNWELL

Redcoat is the story of the British soldier from c.1760 until c.1860 - surely one of the most enduring and magnetic subjects of the British past. Solidly based on the letters and diaries of the men who served and the women who followed them, the book is rich in the history of the period. It charts Wolfe's victory and death at Quebec, the American War of Independence, the Duke of York's campaign in Flanders, Wellington's Peninsular War, Waterloo,the retreat from Kabul, the Sikh wars in 1845-9, the Crimean war and the Indian Mutiny.The focus of Redcoat, however, is the individual recollection and experience of the ordinary soldiers serving in the wars fought by Georgian and early Victorian England.Through their stories and anecdotes - of uniforms, equipment,'taking the King's shilling', flogging, wounds, food, barrack life, courage, comradeship, death, love and loss - Richard Holmes provides a comprehensive portrait of a fallible but extraordinarily successful fighting force.

'Such a scene of mortal strife from the fire of fifty men was never witnessed...' writes Harry Smith of the 95th Rifles, recounting the death of a brother officer in Spain in 1813. 'I wept over his remains with a bursting heart as, with his company who adored him, I consigned to the grave the last external appearance of Daniel Cadoux. His fame can never die.' Smith's account is typical of the emotions and experiences of the men who appear on every page of this book, sporting their red uniforms to fight for King and country.

'I have never met Richard Holmes, but I am deeply jealous of him for Redcoat opens with the re-enactment of a Napoleonic battle that I wish I had written myself... The redcoat and his family were never appreciated, but Richard Holmes has written them a marvellous memorial. Redcoat is a wonderful book, full of anecdote and good sense. Anyone who has enjoyed a Sharpe story will love it, anyone who likes history will want to own it and anyone who cherishes good writing will read it with pleasure.' BERNARD CORNWELL, Daily Mail

Writer and historian Hugh Bicheno is a former intelligence officer and anti-terrorism consultant, who after many years living in the Americas now lives in Cambridge. His previous books include Gettysburg, Midway and Crescent and Cross.

GOR000750930
9780006531524
0006531520
Redcoat: The British Soldier in the Age of Horse and Musket by Richard Holmes
Richard Holmes
Used - Very Good
Paperback
HarperCollins Publishers
2002-08-05
400
N/A
Book picture is for illustrative purposes only, actual binding, cover or edition may vary.
This is a used book - there is no escaping the fact it has been read by someone else and it will show signs of wear and previous use. Overall we expect it to be in very good condition, but if you are not entirely satisfied please get in touch with us
Trustpilot