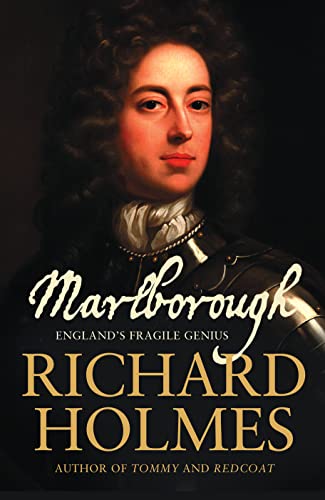 Best-selling military historian Richard Holmes delivers an expertly written and exhilarating account of the life of John Churchill, Duke of Marlborough, Britain's finest soldier, who rose from genteel poverty to lead his country to glory, cementing its position as a major player on the European stage and saviour of the Holy Roman Empire.

Best-selling military historian Richard Holmes delivers an expertly written and exhilarating account of the life of John Churchill, Duke of Marlborough, Britain's finest soldier, who rose from genteel poverty to lead his country to glory, cementing its position as a major player on the European stage and saviour of the Holy Roman Empire.

John Churchill is, by any reasonable analysis, Britain's greatest ever soldier. He mastered strategy, tactics and logistics. His big four battles - Blenheim (which saved the Holy Roman Empire), Ramilies, Oudenarde and Malplaquet - were events at the very centre of the European stage. He captured Lille, France's second city, overran Bavaria and beat a succession of French marshals so badly that one, the squat and energetic Bofflers, was rewarded by Louis XIV for only losing moderately.

A coalition manager long before the phrase was invented, he commanded a huge polyglot army with centrifugal political tendencies and bending it to his will by sheer force of personality.

He was also a politician on the domestic stage, intimate with two monarchs, James II and Queen Anne, and the prop of successive cabinets. He had extraordinary strength and durability. His family connections wove him into the fabric of Europe: his sister Arabella was James II's mistress and their son, James, Duke of Berwick, was one of Louis XIV's most successful commanders. Although the Marlboroughs lost their only son Jack to smallpox, both their daughters married Whig grandees, and their descendants include Sir Winston Churchill and Earl Spencer.

Yet John Churchill was also deeply controversial. He accepted a pension from one of Charles II's mistresses for services vigorously rendered. He owed his rise and his peerage to James II yet, determined to be on the winning side, he deserted him in his hour of need in 1688. He maintained regular correspondence with the Jacobites while serving William and Mary and with the French while fighting Louis XIV. He made money on a prodigious scale, but was notoriously tight-fisted, long regretting an annuity given to a secretary whose quick-wittedness saved him from capture. But in the age when commissions were bought and sold, and commanders often owed their position to the hue of their blood, he never lost his soldiers' confidence.

`Richard Holmes goes far beyond the life of John Churchill, first Duke of Marlborough, to depict the moral and political landscape of an entire age in this rewarding biography of the British general...Holmes is as thrilling on his subject's romantic devotion to his wife...as he is on the battles.' Sunday Times

`We should...welcome a new biography of the man who was so admired by Napoleon and...Winston Churchill - especially if the biographer is Richard Holmes, whose background is a happy blend of military academia and media friendliness. Professor Holmes tackles his subject at a Light Infantry pacem cracking through a wide-ranging biography with confidence and good humour.' Independent on Sunday

`The appeal of Holmes's books is not merely their authority but their style. His lightness of touch makes these 500 pages a joy to read as well as an education.' The Times

`Richard Holmes's new biography...is probably as comprehensive an account of Marlborough as any single volume can hope to be...there is nobody writing who can move from column into line quite as smoothly as [he] does.' David Crane, Spectator

`When it comes to balancing tales of Marlborough's flaws with those of his genius for war, Holmes discharges his material relentlessly...His descriptions of the general's tactical system, the way he ran his armues...are all excellent.' Waterstones Books Quarterly

`His lucid descriptions of the battles...make this work outstanding...Holmes has written what must be the best, because fairest, biography of Marlborough.' Daily Telegraph

GOR001780882
9780007225712
0007225717
Marlborough: England's Fragile Genius by Richard Holmes
Richard Holmes
Used - Very Good
Hardback
HarperCollins Publishers
2008-05-05
512
N/A
Book picture is for illustrative purposes only, actual binding, cover or edition may vary.
This is a used book - there is no escaping the fact it has been read by someone else and it will show signs of wear and previous use. Overall we expect it to be in very good condition, but if you are not entirely satisfied please get in touch with us
Trustpilot