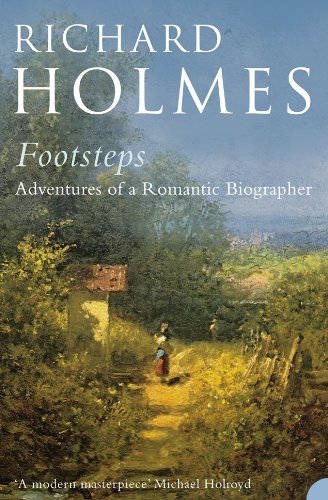 In 1985, Richard Holmes published a small book of essays called Footsteps and the writing of biography was changed forever. A daring mix of travel, biographical sleuthing and personal memoir, it broke all the conventions of the genre and remains ons of the most intoxicating, magical works of modern literary exploration ever published.

Sleeping rough, he retraces Robert Louis Stevenson's famous journey through the Cevennes. Caught up in the Parisian riots of the 1960s, he dives back in time to the terrors of Wordsworth and of Mary Wollstonecraft marooned in Revolutionary Paris and then into the strange tortured worlds of Gerard de Nerval. Wandering through Italy, he stalks Shelley and his band of Romantic idealists to Casa Magni on the Gulf of Spezia.

Richard Holmes is Professor of Biographical Studies at the University of East Anglia, and editor of the Harper Perennial series Classic Biographies launched in 2004. His is a Fellow of the British Academy, has honorary doctorates from UEA and the Tavistock Institute, and was awarded an OBE in 1992.

His first book, Shelley: The Pursuit, won the Somerset Maugham Prize in 1974. Coleridge: Early Visions won the 1989 Whitbread Book of the Year, and Dr Johnson & Mr Savage won the James Tait Black Prize. Coleridge: Darker Reflections, won the Duff Cooper Prize and the Heinemann Award. He has published two studies of European biography, Footsteps: Adventures of a Romantic Biographer in 1985, and Sidetracks: Explorations of a Romantic Biographer in 2000.

GOR002076852
9780007204533
0007204531
Footsteps by Richard Holmes
Richard Holmes
Used - Very Good
Paperback
HarperCollins Publishers
2005-08-15
288
N/A
Book picture is for illustrative purposes only, actual binding, cover or edition may vary.
This is a used book - there is no escaping the fact it has been read by someone else and it will show signs of wear and previous use. Overall we expect it to be in very good condition, but if you are not entirely satisfied please get in touch with us
Trustpilot